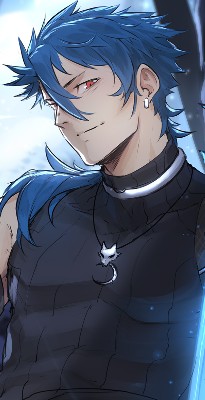 When his eyes opened she felt more relief, glad that the spell seemed to be working quickly enough despite some of the hefty damage he took. She hadn’t been conscious for some of it, but the wounds and budding bruises spoke for themselves. Those red orbs – almost ruby-like – looked a little dazed still like he hadn’t fully come around, but it was the words that confused and worried the girl. For starters she’d never possessed wings that she knew of, and likely not even temporarily for that matter. Had he perhaps confused her species by accident? ”I’m not, I’m more like a flashlight right now than an angel…at least…I don’t think they glow…do they?”

Natural for her, Mao had taken the statement too literal, though as she hadn’t yet met an angel the girl couldn’t very well say if she resembled one or not in that moment. For one thing she definitely lacked wings that most pictures portrayed – though the halo seemed to come and go depending on artistic interpretations. Perhaps it was the same with wings? Lightly she massaged his head, hoping the man would fully come back to his senses or else she might begin to worry about potential brain damage or something of the like.

As they sat there some of the locals returned, a few of those burly men the owner kicked out moving to deal with the body of the once determined boss. What they did with some of the lesser fellows she didn’t see, their unconscious forms on the other side of the building, but she opted to ignore any of the whimpering or sniveling that lightly drifted over to the side as a barmaid came over with what appeared to be a first aid kit and bottle of alcohol.

”S’not the good stuff I’m afraid,” she explained with a half-smile, ”though don’t worry hun: my husband’s got some stuff for you guys to take ‘long with y’all now. This’s just for his wounds.”

”Oh, if you could just leave those with me I can tend to his wounds,” Mao reassured her with a smile, the woman’s only seeming to grow in response and asked if she was sure. ”I am…the spell’s simple so I won’t know exactly what’s healed until it wears off, so it’s better to wait a little more than waste anything where it might not be needed after all.” Another part of her figured it might be better to be treated by someone he knew a little more, Mao not entirely sure of his preferences on the matter yet she wanted to err on the side of caution. ’Plus it’s the least he deserves considering all he’s done to help me,’ she thought while watching the woman trudge off to help with cleanup.