Flower in the Reign [Private job for Aceflux and ZUN]

Flower in the Reign [Private job for Aceflux and ZUN]

Selah sighed, looking at the available jobs on the board. Almost all of them were out of their league. She looked over at Zach, a new member to Laughing Coffin, and the first person she had invited to be a team member. "So, what do you think? Looks like we've only got three options, the rest of them are all way to out of our league..." Selah said, taking three of the posters off of the large wooden board that held every job Laughing Coffin had available. "We have a choice between finding a book in a library, digging up some old skeleton, or finding a rare flower for a medicine shop." Selah said tiredly, none of those jobs particularly interesting her. 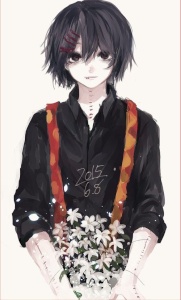 Zacharias sat down at the table across from Selah, his body sprawled out like he was sitting in a lounge chair. "You finally got one?" He said as his partner stood up, the boredom coming out quite obviously in his voice. He did say that he would do things for the guild, but he didn't realize that the process of choosing jobs would be so...tedious. Tariel and Lazav were arguing, at least; it gave him something to enjoy while Selah did the boring work.

"Its uh, not exactly the friendliest place. Wolves, goblins, all those things, you'll see what I mean when we get there." Selah said, tucking the job poster in her bag. "We should head to the Medicine Shop in magnolia first, see just what kind of flower they need. We'll take a train there, theres one in the nearby town." Selah said as she headed towards the large imposing door's of the Laughing Coffin guild hall. About an hour later, they were at the train station waiting for the next train to arrive. "Ugh, I love laughing coffin and all but why does the guild hall have to be so far away from any form of civilization? Seriously, the walk here could have been so much shorter." Selah said with an annoyed tone.

"Sounds like a pretty fun place to me!" Zacharias exclaimed lightheartedly, skipping along behind Selah as the two headed for the Laughing Coffin doors. "As long as we don't sit around that much, I'm fine with wherever." He hummed to himself the majority of the way to the train station, although he quieted a bit when his companion spoke again. "I prefer it far away from other cities, actually," the androgynous boy responded. "The place reminds me of home that away. The one that burned to the ground. Thanks, Lazav."
"No problem," The evil voice countered snidely, currently ignoring Tariel's current lecture on morality.
Zacharias sighed exasperatedly. "Figures. Anyway," he continued, turning to face Selah again, "I'm looking forward to exploring the forest. Whether it's easy or not, it seems like it'll be a fun place to hang out in. I might let Tariel out at some point; they said they'd enjoy helping to search for the flower. I'll try not to let Lazav take charge, but if he forces his way out, you have my permission to rough him up a bit. That sound good to you?"
_____________________________________________________________________________________
Character | Magic
Aceflux

Selah looked confused for a second then remember that this kid had two other people with him at all times. One basically the ultimate good guy, the other the polar opposite. "Yeah, exploring it should be fun. It would be nice to finally meet either of the wonder twins, im calling them that from now on by the way, even if its the bad one. Just lock him up with one of my spells, easy as pie." Selah said with confidance, snickering at her new name for Tariel and Lazav. No doubt one of them would be raising hell at the name, from what Selah had grown to know about it.

"I'm sure they'd like to meet you too," Zacharias responded cheerfully, although his personalities didn't seem to agree.
"Lock me up? Heh, good luck with that," Lazav muttered.
"Quiet, evildoer," Tariel replied, his voice crystalline and commanding.
"Why don't you, you chuuni," Lazav shot back.
Zacharias sighed. "And now they're arguing again. Great!" The Libran stretched out, following Selah lackadaisically. He didn't care particularly where they were going, although Magnolia did seem like a fun place to make some new friends; he just wished they could get there faster. As much as Zach liked Laughing Coffin, the castle seemed too big; it made the whole thing seem empty, which bored him.
Maybe things would get a bit more entertaining if he let Lazav or Tariel out? Probably not. Lazav would probably just delay things, and Tariel would probably annoy Selah to no end. Either way, it wasn't something he would wish upon his new friend. He would just follow along and let Selah lead him to his destination; she knew where she was going better than Zach did, after all.
_____________________________________________________________________________________
Character | Magic
« View previous topic · View next topic »