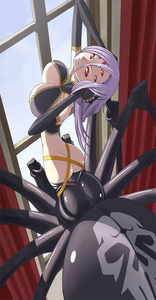 Each strand had been woven to perfection every fiber in her fine silken threads built her new clothing as she smiled the grayed out basilisk fang symbol on her shoulder having been sadly inactive since she went back to sleep. The chittering of her children cooed her to smile as she bent down picking up a spider roughly half her size as she kissed their mandibles smiling, “Oh my dear child you feared I would not wake hmm? I am back to once again do as I need but first. . .” Her stomach would churn and snarl as it seemed she was in a large need of food and that would mean going to a human settlement as he set down her child smiling and getting up the silken tube that had been attached to her abdomen slowly pulling out a final egg rolling out of it as she yawned and stretched feeling her chest, “Have I gotten. . .Bigger?” She had to admit it was hilarious but she soon wove bigger clothing from her soft and strong silk walking out of the cave slowly her worried children trying to follow as she held them back, “No let me do this I may have just woken up but I need food.”

As she approached the mountain town she could see deeper into the mountain was a massive castle that had not been there when she had gone to sleep, “What is this?! Did humans expand more? And it has a midi feel to it. . . I have not been there in a while but that is curious.” As she began to reach the gate she felt something magical in nature further in way above herself as she gasped slightly, “I have not felt power like that since Elijah. . .” With a chuckle her curiosity peaked she would open the doors of the town slowly walking inside as the eyes of people ready to see a new human customer were soon turned to fearful and even angry eyes each one burning into her as she sighed, “You silly humans always look at me like that.” With a slow walk she would approach a stall filled with assorted meats as she pulled out the last few jewels she had and set them down, “Would I be able to purchase some of that beef?” She could smell the blood coming off the meat but it was taking every bit of her strength to not kill the humans here and eat them as they had done nothing to invoke her anger. . . Yet.

As the human denied her services saying that a monster like her should leave she would sigh and walking away begrudgingly, “Tsk you humans and your fear always ticks me off something wrong with my look hmmm?” With a glare back to the shop owner she would continue her look for food getting denied sadly almost every stall she went to as they all asked her to leave a small  bit of a frown growing on her face, “This is pathetic I have money to pay for it and I get denied. . .” As she was about to head to the next stall a man would walk up with a couple more behind him all armed to the teeth with swords, “Oi get out of our town monster.” They were blunt and to the point she had to kind of admire that fact, “I am no monster and have done nothing but try to buy food with legitimate money is that right of you people?” With a laugh the men would pull out their swords causing her to glare down at them obviously out sizing them, “No monster is ever served here so you can either leave and take your ugly spider ass out or we kill you.” the mention of the words ugly and spider set her off however a small glare towards them going from angry to harsh, “What?~ I think not you racist piece of shit. . . I shall stay in this town and attempt to get food like a regular human would you incessant bigot.” With that the men laughed and lunged at her trying to bring their longswords down on her as she moved much faster than something her size should be able to shattering the swords in her hands with her chitin covered hands and taking their heads off one by one as she looked at the now growing crowd which had begun to throw rocks at her, “Oh for the. . . I WAS DEFENDING MYSELF YOU RACIST ASSHOLES!” Her anger was only beginning to rise at this town filled with people she was ready to consider corpses at this point.
Ardere Kasai

Her anger only rose more as the rocks and other things were thrown at her as the shadows around her began to twist and move on their own but to her surprise someone spoke to her from the side not yelling, not cursing and not even calling her a monster. No this voice said to come with them before the guards came, “What? Who are you?” Looking down to the man who had spoken she could see him running his fingers through his hair as she sighed, “Fine. . . I would prefer not to let this go on but it is better than death I suppose.” Following the man outside the city she would soon grab the man and begin to shift into the shadows as she would slither along them the man in the shadows with her able to see a sight not many had seen before as they seemed to run through a world of threads and silk soon shifting out back to reality just outside the walls of the city as she sighed. “Sorry for that. . . I would rather you not have been lyn. . .” With a quick gasp she could feel with power from him within moments, “You are the one with the power on the level of Elijah Escariot. . . You. . . Are you a guild master?” With a look at the man her six eyes would scan him looking for any form of tattoo unable to even see it due to the armor. “If you are from a legal guild then I suggest you leave. Guild Master or not associating with one of my ilk is a bad idea.” She would point to the almost completely faded Basilisk Fang tattoo on her shoulder and make a small hiss. “As you can see I am not the best to be around and judging from how we got out. . . You can guess much. . . But first I ne. . .” turning her head to the area behind her as her once proud and cautious nature seemed to go out the window.