Nao would keep hiding for a little while, as he watched the giant bird that was Tammy would keep flying over the battlefield, using her summons and magic to keep their opponents from doing anything. It was pretty awesome to see how well Tammy had developed from this girl who had destroyed half a jewellery store, to this bird who became a bird and not just a pony. Kind of interesting to see how she and Ana had developed over the course of the last few missions… especially Ana who had somehow changed or grown or something.

Nao would watch as Ana would travel past with her mount, seeing her smile briefly as they charged forward, though not with the sound of guns or any kinds of conflict. This made him figure that either it was his turn in the fight, or that the enemies were all dead. Either way it was good for him.

He would look up and zoom in, seeing the two rush off into the tunnel ahead of them. Not that Nao was concerned for their wellbeing, but rushing off into where the boss could have been seemed to be a little stupid in his opinion. In fact, he was thinking this was probably a really bad idea.

Nao would ponder for a little while, as he watched Ana’s pet run back and stop at him, trying to motion for him to get on. Were they really in that much of a hurry? Alright then? Nao would just have to climb onto the legendary dog, and then just move into the tunnels that the ruins had.

He would arrive, seeing that they were there, along with a bunch of bodies that were on the floor, along with a surprise guest on this show. Nao didn’t expect to see Ashe here at the ruins.

”Oh hi Ashe!” Nao would say in his most “Tommy Wiseau” accent that he could give… despite not really knowing who that was. ”I didn’t expect to see you wandering this ruins… You’re not a part of this treasure hunting group are you?” He got off of the dog, and took a few steps forward before hearing a sound as if he had found a random encounter… dammit.

The member 'Nao' has done the following action : Dice Rolls 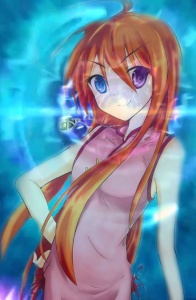 Tammy was quite interested in the woman who had seemed to scare away the entire group of treasure hunters that were confronting them. “Huh? Me? A treasure hunter? Do I look even remotely close to being some sort of riff raff that may be hanging out in ruins and plundering or doing worse things to the dead and their stuff….I mean really do these old ruins have anything I would want?!” Tammy yelled as her feathers would puff out a bit as she felt highly insulted that this woman would suggest such a thing as a legal wizard plundering ruins “Wait! How do I know you aren’t one of these ….rather unscrupulous people!” she yelled noticing that this person hadn’t come from outside but seemed to have already been inside.

It didn’t take long for the rest of the group to catch up to her, except the new girl who had come with them, she seemed to have stayed outside for whatever the reason be. “Oh you know this loon then Nao? Friend of yours she seems like the kind of person you and Ana might come across while on a job you know” She said with a smirk as, well they had actually met with her on a job as well. “So Ashe was it…Do you mind putting that sword away out of my face I don’t want to have to harm you too much if I am forced to do so.” She would say as two rather large breast feathers would protrude out from her chest moments before she turned back to her normal form.

“I…hear more people nearby I hope it’s not more of those guys with the guns I hated those guys we met up with a little bit ago outside……that and gunpowder smells terrible!” Tammy yelled now fully back to normal as her summon saunters up to her side, merely half her height. “Mind dealing with a couple of them for me?” She asked as the summon created several balls of pure mana energy that it had previously ripped out of the first set of enemies. The spheres would then crash down onto a group of gun carrying treasure hunters.