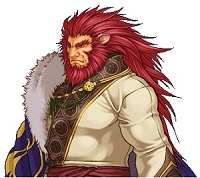 He'd walked Nemuru to her room, and went to his own, intending to sleep, but he just couldn't seem to doze off, so he'd gone walking, to try to clear his head and calm down enough to sleep. Alas, it seemed that was not in the cards for tonight. As he'd wandered wherever his feet led him, he found himself down in the docks section, and stumbling across a group of angry and scared looking, blood spattered guardsmen. "Here now, what seems to be going on? Can I help in some way?" He looked from frightened and angry face, to the next.

The guards looked him over, in chainmail and with his hammer hanging from his belt, frowning slightly. "might be you can sir, might be you can...there's been a murderer on the loose down here in the docks. We found out who it was tonight, but he took out one of our own and fled. Names Jacob Goodnight. Was a miner nearby, but lost it. Took up his fathers tools, and his father was a butcher. Been going around with those chopping up people, for no reason we can figure out...If you can stop him, we're authorized to reward you. If you bring him in, even more so. Still, either way you'll have our gratitude...

He gave a grunt as he listened, and nodded slightly. "Something has to be done...Sure, i'll step in and help. Where was the guy last seen?" He unhooked his hammer, looking around nerviously. "And what all can you tell me about his habits....where have the murders happened, who got killed? Is there any pattern?" He scratched his head a moment, eyes half closed. "A map of the area would be wonderful as well, if you have one." He started forming his plan in his head, slowly visualizing what he would need, and how he could do it...luckily the docks had what he needed. it was just a matter of finding the proper spot.

"He seems to just attack targets of opportunity  Those that are alone and seem defenseless..."  The guard spoke among themselves quickly, comparing the different cases they had heard about, and what they had seen that night.  One of them pulled out a map, as they started to mark it.  "Firs one was about here...She was a street walker, so while it was reported, no one really looked to deeply inta it, ya know? But then the next three nights saw three more."  Three more marks went down onto the paper As they spoke, looking quite grim  "Just normal folks, doin their everyday thing, snuffed out like a candle.  Ain't right...Ain't right at all.  So we looked into it tonight an...."  He shook his head, looking down, as did the rest of the guard, some balling up their fists in anger.
(140)

After studying the map that the guard had given him, he laid his plan. First was setting up the trap...a narrow ally between two warehouses....some quick work would be needed. First a place to hide his hammer, then to the actual work....luckily there was plenty of scrap around to work with. Checking his surroundings, he focused on the pile of scrap in front of him, half closing his eyes as he focused on the spell, chanting softly under his breath, watching as the scraps started to melt together, setting themselves against each other, tiny magic circles appearing at each join as his magic worked to weld them together as if he was working them on a forge.

The glow from the magic illuminated the area around him, his fingers twitching as the bits of metal, the hoops from barrels, the discarded nails from opened crates, a few crowbars that had been left sitting around. It was almost like his creation was a living thing, the strands that were farming the bars seeming to lash out to attach to metal only to draw it in. Sweat beaded upon his brow, the strain starting to show, the heat from the magically worked metal causing it to evaporate as quickly as it came.

Gritting his teeth, he tossed up the scrap of chain, letting it fall on top of the cage of metal he'd cobbled together out of the scrap and detreus around him, letting the magic weld it to the top, and then he gestured with his hands, as if crushing something, letting the magic set the metal, forcing it all into one, solid piece, stronger then its component parts. The magic circles slowly sunk into the metal, and then the glow and heat faded, leaving him with a solid cage. Tossing a rope over one of the nearby pullies, he hoisted it up out of sight in the gloom above. Stashing his hammer near where the rope was tied off, he ventured up towards the mouth of the alleyway, hunching over and pulling his hood up, assuming the stooped and bent pose of an old cripple, trying to hide some of his height, and the fact he was wearing armor. Stooping low, he laid down in a little corner, as if sleeping.

If he'd read the map right, most of the murders had happened along this main road here. He curled up, waiting, listening. Hoping he had baited his trap well, hoping....He froze slightly, hearing a scuff, a jangle. He turned, grunting in pain as the blade bit into his side, the armor deflecting it slightly , though it still bit in. Stumbling into a run, he heard the persuit behind him, gasping in pain as he ducked to one side, a thrown knife grazing his cheek even as he snatched up his hammer, spinning to confront his foe...his massive, overpowering foe....He let fear show on his face ashe took a step back, then another, weapon held ready, shaking slightly He lunged forward, swinging a few times, managing to connect once even, though he got a cut on the face in return. Backing up more, he looked up at the mountain of a man, powerful that he was.

Magic flashed into his hammer, putting strength behind his blows, though it was still only serving to infuriate the man...Stepping back slightly, a few more steps, now he waited for Jacob to lunge, and when he did, he grabbed hold of that place inside of him, the place where the curse and his families power came from. Pulling hard, he watched as time slowed to a crawl, and then a stop. Panting with the strain, he ducked around the frozen Jacob, heading for where the rope was tied, reaching it just as time seemed to shudder to a start again, and tugged on the rope, letting the heavy metal cage fall on the confused jacob, who was looking around for him, right up till the cage clipped his head, knocking him out and restraining him, as Ciran called for the guard at the top of his lungs, sagging exausted against the wall of the alley.