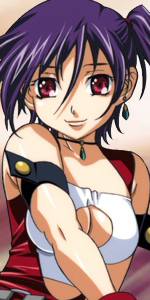 Eclair, having a little boring day, had been spending her day at the bar, drinking her boredom away with some lemonade and started to read a book on magic and ancient spirits. "hmm... i wonder if any spirits would allow me to be their summoner... hmm... maybe if i get a few spirits that are kinda strong then maybe i could get a powerful one, like Odin or even Shiva. if i was able to summon spirits, i would love to have Shiva or Odin or even a Ifrit spirit, then i could protect the guild better then i can already. i wonder if anyone can summon spirits like that around here... maybe they could teach me a few things. " Eclair thought, saying it out loud without noticing before someone told her, making her laugh.
Guest

While the figure of Fairy Tail's newest Joyan mage was already becoming a regular sight in the room of late, seeing her without her headphones over her ears was something of a novelty. Seeing her looking towards another member however was almost a miracle, but it was indeed happening as Kiki's eyes watched the giggling girl with a mixture of concern and curiosity. Most of the names she'd spoken about were gibberish to Kiki. Afterall, these were spirits and, as a hearer, Kiki's talents were to the living rather than the dead or the celestial - or otherwise non-existent on this plane. But one name stood about above them that caught her attention; Ifrit.

It was a name that was mentioned somewhat sparsely in tales she'd heard as a child. While each tale was different and portrayed many different personalities of the spirit, the ideology behind it stayed the same; a spirit born of eternal flames of the purest kind. Some claimed Ifrit was a demon from Sin, others that the spirit was once a god. But this girl, whoever she was, was claiming that Ifrit was a 'summon'? This intrigued Kiki so much so that she finally broke out of her shell and sat beside this girl. "Ifrit...is it truly possible to summon creatures of such phenomenal lore, with such unbridled strength?"
Eclair

Eclair, being a bit surprised by the girl that just appeared next to her, would have a surprised look on her face before having a confused look on her face as the girl would ask if it was possible to summon Ifrit, a being of such power and strength. "well, i am planning to summon it, alongside Odin and maybe even Bahamut. Ifrit is very powerful but with enough training and courage, any monster can be contracted to be a summon. i have Shiva already contracted but i can't summon any monster currently. what is your name? i am Eclair and it is very nice to meet you. " Eclair said in a very kind tone before taking her hand out towards the girl, smiling very sweetly.
Cereth

It had only been a few days since Amir had arrived in Magnolia and been accepted into a guild of mages he had heard stories about during his elopement. One of the more difficult changes for him since he had to leave his home was the day and night rhythm he had been used to for so long. This land had a completely different rhythm than Desierto and actually sleeping during the night had proven rather difficult for the young mage. As a result, he was feeling absolutely whacked for the past two days.

'It can't go on like this...' he thought while yawning and walking into the guild hall. 'I have to do something or I am going to fall asleep.'

Looking around, he noticed a few people around, remembering none of them from before. Two women caught his eye, sitting together by the bar, a book next to one of the two.

Giving both a glance, the one with the book seemed nice, with a smile on her face, extending a hand to the other woman. The light skin went well with the rather short, purple hair and clothes she wore. The other woman had something to her that intruiged Amir to take a second, closer look. His eyes clung to the tail that was extending from her lower back through a hole in the clothing. Looking up, he took note of the markings on her cheeks and the cat-like ears. There was something about the two that he could not quite grasp, but drew his attention nonetheless.

Slowly approaching them as to not cause a ruckus, he caught a few scraps of their conversation. Amir did not recognize much of what the purple-haired woman was talking about, but what he understood was something about summoning and a word he was all too aware of: Ifrit. Now that was an unexpected name to hear in these lands, with Desierto so far away. He had to know more and his curiosity got the better of him, as it so often did.

"Excuse me, sayyida, and forgive my intrusion into your colloquy. My name is Amir Basim," he said, giving a charming smile, politely bowing before the two women with the right arm held before his chest. "I could not help but become aware of both of you upon entering this hall. I must admit that I did overhear parts of your conversation, as I could not avoid it passing by you. I am aware that I do not know you, but if I may be so bold, the notion of a creature you call Ifrit intrigued me to approach you."

He hoped using the most formal style of speech he had learned as a kid was enough to prevent offending any of the two.

"How, if I may inquire, did you garner knowledge of one of those who dwell in the grand palaces in my homelands? This would be of great help to me."
« View previous topic · View next topic »