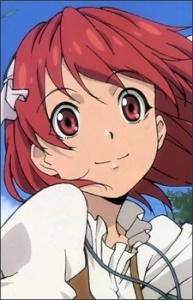 "A giant chicken? Really?" Gazette read in disbelief, not sure that she wasn't being toyed with. She guessed stranger things had happened, she just didn't think that it was plausible. There were a lot of jobs like that on the board though, likely for a similar reason. Nobody believed half of these requests were real. However, there wasn't any reports she'd heard of a phony job request. She'd hate for this to be the first, but she knew that it wasn't like she had a lot of choice. The D-rank jobs were going fats with all the new comers, so she decided to pounce on the opportunity.

She would hate to fall behind the others, especially after trying so hard to impress them before. If she was going to make a name for herself, then she was going to have to tackle any and every job she could. She knew there'd be silly stuff like this for now, but she also knew it'd get better eventually. The Iron Maiden grabbed her knapsack and took off, sure that she'd find this chicken in no time, especially if it was half as big as the job sheet made it seem. Luckily, she'd managed to get a job here in town, so she could probably be back in the guild hall before dinner. She was determined now, sure that she could do it.

Sprinting hard down the road, Gazette made her way to the farm where the chicken had escaped from. She figured, if she didn't know where it was now, the best way to find it would be to go where it started at, and follow it's trail of destruction. It shouldn't be too hard to track, right? It was a giant fricking chicken. Not something you saw too often. She was confident it'd not take her too long after she got there.

She arrived to see a rather disgruntled farmer cleaning up after the mess she assumed that the chicken had caused. He didn't really notice Gazette's approach, she cleared her throat shyly and bowed as the man looked up. She introduced herself as an Iron Maker mage from Blue Pegasus, but he seemed far from interested. She just sighed and asked which way the chicken had went. Her face of annoyance quickly changed to show her shock, as she turned to see not just a mild path of destruction, but a road littered with overturned cars and various other types of debris.

She had already began to formulate a plan. The cage for this five-foot tall chicken was fairly large, the size of the average barn, actually. She figured that they could lure it in simply, getting it's attention, then making it chase them back here.

"This might sound silly, but what kind of food does the chicken eat? Does he have a favorite?" She asked, risking sounding like a child. She was prepared to be laughed at, but much to her surprise they did have serious answers. Apparently, the chicken was a fan of giant pumpkin seeds, seeds the size of the average person's head, from pumpkin's the size of houses. She was astonished at the size. Quickly, she took two seeds. She was going to need the help of the farmer for her idea to work, however, as she wasn't sure she could outrun a chicken almost as tall as her. The farmer agreed, so long as the chicken didn't get hurt, he'd be willing to do anything to get it back. She promised that the chicken would be fine, and they got to work.

To the rear bumper of the farmer's truck, they tied one of the seeds. The second seed was just to get the chicken's attention, after he's had one seed, and seen another, he's gonna want the second seed.

They drove through town, Gazette in the bed of the truck, one seed under her left arm with a rope tied to it, and another under her right that she planned to throw at the feet of the chicken. It didn't take too long to find the chicken, and when they did she chucked the seed from her right arm at the feet. Excitedly, the chicken gobbled it up, and took notice of the second seed under her arm. Afraid that the chicken might come rushing at her, she tossed the seed down and slapped the hood of the truck, telling the farmer to gun it back to the farm.

The truck tore through the town, almost as bad as the chicken itself did. They took the most direct route back to the farm, but that meant going through parts of town that didn't have the enormous foul rear it's angry head at yet. They were taken aback to say the least, but things went off without a hitch. They drove right into the barn, the chicken followed, and they closed to door, trapping the chicken back in it's cage. Gazette was satisfied, she just hoped the farmer was half as happy as she was that it was handled.