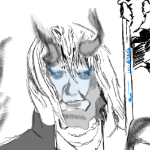 There is a skyline in the distance. A brilliant and bright city with building after building crowded into a dense and industrious center. The city is closer now. Rushing past the buildings to the base of one crumbling high-rise. The first story passes by. The second now, and with more speed. There is a blur of windows and brick. Eighteen... Nineteen...

The streets of Hargeon were arteries as of today, as they ran with the bodies of young eager wizards. Crowding together, they were flowing to the center of a registration area of the town, toward a superstructure east of town close to the docks. A factory, although not active and not industrious, legal officials awaited with a box of papers and registration things, along with Magic Cameras.

Glancing at it the crowd a single boy stood out far more than the rest. Standing at 5'0" with button up suit, on his side a black Nodachi in sheath ranging about 2 meters, roughly a head above the child. Smoke pours from the stacks high above the outer wall. The gates are open. It was Young Thane, and he was in line, kept as such as the guarded Magician officials distributed Passports for a hefty price. The patient Knight awaited in the line, just thinking to himself what and how long this would take, especially with another 500 bodies behind and in front of him.

Thane sat idle in the long long line of Wizards that were awaiting to purchase a passport to other portions of Earth-land. There was a MASSIVE line of young wizards that wished to travel to the other portions of the realm. This was rather.... Unsettling for the young Master. He was likely the second shortest there, and most definitely the youngest. As such he was facing some less than reputable beings in the line, each of whom ridiculed him for his height. Any who, Thane gripped the 2 meter person-stabber by the scabbard and began to tap the ground with the tip of the sheath in an impatient manner.

Thane began to daydream his dreams of death and destruction, the curses brought upon him by the sword he wielded haunted him. Still, as an unconscious action with each leaving resident of the vast arteries of the line, Thane stepped forward. Witnessing the death of his family and his many brothers, his friends of old age and at the hands of monsters. The long line was getting shorter and shorter as time passed, up until Thane was just a few feet away from the table with the registration of wizards booth. His eyed would widen when the dreams had ceased.

"Arent you a bit young to be holding a sword that big?" The man behind the table asked at the industrious registration of Magicians. To which Thane would respond in an annoyed tone "Sir, no disrespect but, It isn't your job to ask that question." Thane was old enough to understand that he was older and more dangerous than most people breathing in this line, after all he was a Death Knight.

"Name."
"Thane."
"Weight."
"110 pounds."
"Height."
"5'0"."
"Age."
"1000+."
"Whatever kid, stand in front of the Camera . . . ."
Thane did as the man asked, stepping before the camera he waited just a moment before unsheathing the sword, Thane's body would stretch and grow until his flesh fell from his bones, he was telling the truth, his skin and muscles just fell off, they were a vessel for his soul . . . Within mere moments the boy was reduced to a skeleton that was stretching and growing in a horrific manner, his teeth clattered and attempted to make some form or rhythmic clack that would resemble speech. Thane was slowly receding from sight as a magical bombardment of death magic rained upon his bones, reforming something from the skeletal figure that stood before the representative members present.

Within moments new organs would form and extremely well toned muscle tissues, leading to the pale and somewhat porcelain skin that would adorn his figure. The creature was 6'0”, his body structure was human and his face was fairly handsome, easily identifying as having been the true incarnation of what a Knight would look like. Dashing and charming, the white skinned figure would develop hair and glowing blue eyes. The regal clothing the child earlier had been wearing was now that of a pair of metal greaves that emitted dark shadowy energies. The picture was taken, Thane sheathed the blade, took the passport, and walked along on his merry way leaving the men behind the desk absolutely horrified . . . .