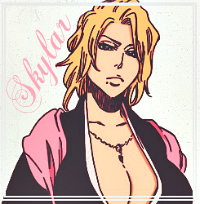 ✖"Beauty is power; a smile is its sword"✖
- Skylar Shikon
Hargeon Town after dark.

Usually the port city was teeming with tourists and racked with humidity, but neither elements were out tonight. The visitors that usually flocked to the town were all inside their hotel rooms or gone from Hargeon altogether. As for the normal heat of the night, it too was gone. It was replaced with an eerie chill that had fallen over the whole town itself. Skylar walked slowly through the streets of the city with a bored look in her eyes. One might mistake it for laziness or being absent-minded but if you looked closely, you'd see that the strawberry-blonde had her hand resting on the hilt of her katana. If she so much as sensed danger she would not hesitate to draw her mystical blade and cut down the man she was after.

The town guard had informed Skylar that he was a mine worker gone rogue. He'd butchered several people over the past few days and his latest victim had been one of the town guard themselves. That was when the call went forth for magical assistance. Now Skylar stalked through the streets and back alleys of Hargeon, her body on full alert. To be able to kill several people was a sign of intelligence and even the Guard Captain admitted that everyone had not only underestimated Jacob's wit but also his capacity for violence. To call the man brutal would be an understatement. His bounty was of the standard "Dead or Alive" variety but everyone knew that if he was brought in alive, he'd be executed the next day.

This man could not live.

Skylar continued her silent patrol through the city streets, listening for anything that seemed off. She knew that Jacob would be extra careful in his own movements. The whole city was alert to his presence and everyone was on the lookout for him... He was smarter than he looked though. Just because the streets were deserted didn't mean he couldn't hunt. There was always someone that didn't listen to everyone else. Skylar was sure that there were people still outside even though the guards had ordered everyone inside. She just had to find that someone before Jacob did.

Skylar knew that she was making good time on her patrol through the city, but Hargeon was a large town and it had many back alleys. If she was going to find this killer, she was going to need a better vantage point...

"Ascension of the Goddess."

Skylar snapped her perfectly manicured fingers as a bright orange magic circle appeared under her feet. The strawberry blond woman crouched down for a moment before she jumped into the air. However, she became a blur as her telekinesis sent her careening up into the night sky. Her short hair went flying around wildly as she rose, her jet black robes following suit. Skylar shot up like a rocket until she snapped her fingers again and her momentum ceased entirely. It all happened in a matter of seconds, really. One moment she was on the ground, next she was aloft in the sky over looking the city. Skylar set a hand on the hilt of her sword as she moon reflected off of her back.

"Now, Mister Goodnight... Where are you?"

Skylar closed her grey eyes as her body began letting off a shimmering grey aura, as if she were taking in the light of the moon to empower herself. "Senses of the Goddess!" As soon as Skylar ended those words, the aura around her body began to grow and grow, spewing outwards at an alarming rate. The pulse of magic rippled outwards more and more until it had washed over 30 meters of the city below her.

The pulse washed through any building it touched. Skylar focused as she saw the thousands of people below her. Some were sleeping, others were eating dinner. Many were holding each other close, wishing for the killer to be caught already. That last part made Skylar's brow tighten. She refocused the pulse to that area and let it activate again. She took a deep breath as the information came to her in a flush. The house she had been focusing on was only about 20 meters away from her. There were three people in the 400 square foot house. It was just a tiny little bungalow, like most of the housing for couples was in Hargeon. Skylar narrowed her eyes as she felt her telekinesis wash over the people in the house. Yes, she hadn't been wrong. They were holding one another, but it didn't seem like the type of cuddling that Skylar was used to.

Skylar focused on the other person in the house. His body language was leisurely. He was holding something in his hands as he swayed back and forth. He said something to the couple and it made them tremble again and again. Skylar focused on the man again. He was large and lumbering with a bald head and meaty fingers...

She didn't have time to speculate on exactly how the man had gotten inside. She didn't even have time to wonder what he was armed with. She just knew that she needed to get in that room right now.

At a snap of her fingers, Skylar dropped from the sky like a beautiful rock. She angled herself downwards and placed her hand on her sword hilt as she rocketed down at the sieged bungalow at an astonishing speed. Skylar released the blade from its sheath and brought the flat of the blade along her lips slowly as she whispered to the runned metal. Her incantation was lost to the winds as she plummeted. When she was done, however, and the roof of the house was alarmingly close, Skylar swiped outwards with the blade as she called out "Vibration!".

The blade began to shake violently but still held together as Skylar touched down on the roof - her fall stopped thanks to her telekinesis - and sank her blade through the tile.

The blade shook again and then the vibrations danced down the blade and then to the roof below. The whole building shook violently for a moment before the roof was ripped apart by the violent shaking running through it. Skylar's grey eyes locked with the astonished Jacob Goodnight's as he stood there, battered but mostly unharmed, with a butcher knife in his hand, hovering over the trembling couple.

It was all he managed to say before several pieces of furniture and rubble smashed into the man's head with violent kinetic force. He slumped instantly while the couple ran out of the door, screaming. Skylar Shikon stood up and sighed gently as she sheathed her mystical blade once more and walked over to the fallen killer.