Steel Valors Hunt for the Hunters!

Steel Valors Hunt for the Hunters!

Akeos was walking along the road that lead the Ancient Ruins of Fiore’s southern coastline. Borquise was not far behind him, he was in a particularly foul mood although Akeos had no idea as to the reason why, he had taken on this job with Seria his teammate, apparently they were after a group of people famous for misusing ancient artifacts, and that the artifacts these men were said to be after in these ruins are said to be once owned by Wizard saints of ancient times. However as per the usual, Akeos’s mind was not completely in the present, is pale grey eyes stared onward along the road, his two signature swords, Nōzansukaizu and Sazanshīzu were on their customary places on his hips, however they began to have their appearance slowly change due to the recent growth of Akeos’s own magical power. However, even though Akeos hadn’t noticed, Borquise had and wasn’t letting Akeos out of his sight again. 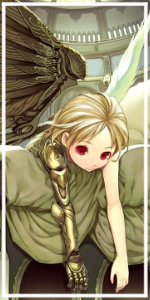 The area was gently dappled with the sunlight, it wasn’t too bright, but a warm enough glow was present to maintain the tranquility. Despite the lack of people the ruins were full of life, as the walls were covered in leafy vines the scrawled the entirety of the masonry in the area. As Seria looked over them it wasn’t clear whether or not the plant life contributed to its obvious aged looked of the rocky architecture, but it certainly looked archaic. The cracking sound of old paper peppered the silence, apart from the sounds of local wildlife, as she turned the pages carefully. It was an old botanist’s journal she had borrowed from a library after doing a few hours of research on the place, whence she and Akeos had decided they wanted to go after this group of people yesterday. A group of treasure hunters, infamous for their abuse or rather misuse of artifacts and lost items of power. As Seria kept flipping through the pages she couldn’t seem to find a particular match for the species, and it particularly frustrated her. She put the book back into a small satchel at the back of her waist after carefully closing it. Returning to the thought of those men who were out here she gazed deeper into the ruins. Usually an excavation took a considerable amount of time, and she could only hope that it was the same in this case, the two arriving a day late.

Akeos then saw Seria out of the corner of his eye waving at him and Borquise, the latter grimaced at the sight of her but he knew it was no use trying to argue against her being here. As they walked a thought suddenly sprung into Akeos’s mind and he reached into his pocket and pulled out a small bottle of milk and quickly consumed it without a second thought. He then nodded and continued on to Seria, when he then promptly bowed and Borquise reluctantly did the same. Akeos then turned towards the ruins as if he was focusing on something specific, yet all that laid out infront of him were numerous broken marble buildings, “What is it Akeos?” Borquise had been watching with a feigned interest and after a long moment, the silent swordsmen responded, “I sense… Malice… Greed… Pride… Emotions of people bent on doing their work here and causing harm to others later on…”

Ever since their chance meeting in that shanty underground fight club, she never really liked Borquise very much, and for a while she only considered that her sense of something… not right with him was off. However recently he just seemed to be a sour individual entirely, so she wasn’t inclined to rescind that declaration even if she had only made it within the confides of her mind. Akeos however was just as he always was, useful but sometimes clueless. She unfolded the paper they had taken down from the job board only a few days earlier, pointing to the words “…dangerous treasure hunters…” and “…Wizard Saints’ Vault” The identities of these men were on the paper as well but at the moment she could really seem to care all too much about them in particular. Anyone who threatens the world with power doesn’t deserve a name in her book. It was kind of ironic given her current situation but she pushed the thought aside. Seria walked ahead on her own for a moment before turning to Akeos and signaling for him to follow.

The ruins were… In a word, vast; the place seemed to span for a few miles in every direction. It was like being in an ancient ghost town, but a little more trying as they were on the clock at the pressing moment. Finding the men in this area was going to prove to be somewhat difficult of a task for them. Seria halted Akeos for a second, and pointed up, trying to indicate she would search from above. She concentrated for a moment, and her face turned a little red as she looked to be holding her breath before she could finally spread her wings in the usual bright and cool fashion, before catching her breath. Finally ready she climbed up the side of the building alone, and once at the top tried to stay near Akeos so they could have different perspectives, yet the same information.
_____________________________________________________________________________________
○ Born to Fly ○

The member 'Seria' has done the following action : Dice Rolls

Akes had taken a step however stopped when Seria had stepped infront of him and held up a flier and then pointed at two different parts of it. He stared long and hard at the flier, reading the words over and over again eventually tilting his head in a very confused Gesture. She then gestured for him to follow her, and he did so returning his gaze to be straight ahead his expressionless stare yet again. Then after a minute Seria halted him, and then pointed up. Akeos then watched as she flew up for some reason, however Akeos wasn’t sure as to why. Then suddenly he caught a sense of vile mirth somewhere to his right, Akeos then looked that direction his eyes narrowing only slightly. Then Suddenly…

A giant Explosion went off roughly 30 meters to the right of their current Location, and without thinking like normal Akeos turned towards the location and dashed forward with minimal steps, and within a minute he arrived at the blast site, he saw ten men around a giant hole in the ground, each of them had a varied array of cannons on their backs. Akeos then stepped forward as a sharp gust of wind blew across the area making his ropes flutter behind him. Hearing the sound of his swords clanking together the ten men swiftly turned around, telekentically aiming ten small cannons right at Akeos, “Halt! Who are you!” Akeos stopped only for a second, and then slowly reached down with his left hand and grabbed the hilt of Sazanshīzu, “Is this the path you choose to go down…?” The men scoffed and one Said, “We said Halt!” Then they all opened fire on Akeos who had dodged the cannon fire by jumping high into the air as he looked at them with a sideways glance midair, “So be it…”
_____________________________________________________________________________________
Akeos Grazak | Mitsurugi Requip