To Earthland and Beyond the Glorious Way! [Job] 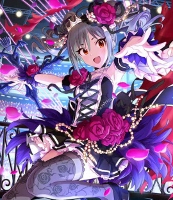 To Earthland and Beyond the Glorious Way! [Job]

The land of Fiore’s big but the world is even bigger. Claymore knew that joining the Rune Knights Special Ops Corp meant that he may have to do a lot of traveling into multiple countries at a given time for diplomatic reasons or for some…unreasonable situations. So before he could do any international traveling he needed to get a passport. Something he had never done and had never needed to do in the first place.

In his research on where to get one, two towns managed to pop up: Hargeon Town and Rose Garden. Rose Garden’s night life and shopping district didn’t really attract Claymore all that much. All the cramped spaces meant that more people were more than likely to touch his splendid body and that was not going to happen. Hargeon Town and its outdoorsy persona along with the multiple transfer stations allowed Claymore more of a chance to see the vast amount of people and the differences each one brought.

With his mind set Claymore left the Rune Knights barracks for the taxi station and hopped aboard the next magical car bound for Hargeon Town. With a prideful strength he climbed to the roof of the car using the sunroof ignoring the other passengers and stood tall upon the magical machine . He puffed up his chest and raised both his hands to the air and with glorious roar he let the world know how he felt. “Hargeon Town! Claymore is on his way and you shall bask in his GLORY!”

"Hey you! Get off the darn roof! We need to get going." The taxi driver didn't seem too pleased to have some goof walking all over his precious car.

A little embarrassed Claymore climbed back into the cab and sat at his seat only then just realizing the other four people in the car. They all stared blankly at him before turning their heads to the other side removing all the attention from Claymore. "This...is going to be a long ride."
Mina

The trip was long, bumpy, and silent. No one in the car wanted to talk to Claymore after his small rant and he found that out in the first five minutes of the trip. Every time he went to start up a conversation the person would squeak his way out by coming up with some excuse for not wanting to talk. After the fourth passenger put his hand up, to stop the conversation from even starting, Claymore turned to his window, let out a small sigh, and stared out at the scenery for the rest of the trip hoping that his experience in Hargeon Town would be as bad.

The town was by far better than the trip there. Claymore didn’t even wait for the car to stop before he thrusted the door open and hopped out. Eyes widened and mouth slightly opened he gazed about all the different buildings and people. To him each new person was a whole different experience and he wanted to learn it all. However he first had to complete his task before mingling with the folk: To get a passport.

Claymore went from vendor to vendor asking about where to go and who to see but each time instead of asking the questions he’d get stuck staring at all the food and valuables each vendor was selling. He had to have something to eat. The urge was building inside of him and he couldn’t hold it any longer. After about thirty minutes of deciding between the crab legs, crab cakes, lobster tail, and shrimpcobobs he finally collapsed and decided to just buy one of each.

With his hunger satisfied and belly full Claymore figured that it was time for him get back to the task that he had set for himself when he left for Hargeon Town. He reached into his satchel and pulled out the crumpled folded map of the town. He laid the map it out in front of him on the table and rubbed his hand across it flattening the map out out. “Let’s see…if I’m to get a passport where do I need to go?”

Through the grunting and discomfort of not knowing what to do Claymore didn’t even notice that a mysterious figure had stopped right behind him. A shadow slowly crept across map as Claymore felt what seemed to be a hand land on his shoulder as a quiet voice reached his ears. “Excuse me but you seem to be having a bit of trouble. Can I help you at all?”

Claymore turned his head in reaction to see the smiling face of a young girl staring at him. Tears began building up in his eyes as he reached over with both hands and clasped the girl’s hands between his. “Oh what a glorious day it is indeed that such a kind stranger would even think to help such a clueless fellow as myself.” He bent his head and pulled the clasped hands to his forehead, emotions now completely taking over his very being.

The young girl, surprised by the reaction of the man, merely laughed at the emotional Claymore and sat down in the chair besides the man deciding to go along with the act. "Alas! I too am clueless but with both our two minds put together I’m sure we can do anything!” She put on her smile again for a brief pause before the two of them burst out laughing at the small act.
Mina

Claymore sat there staring at the girl. She seemed to be matching his personality almost action for action and it felt good to know that there was someone else out there like him. This place and all of its crazy business and the vast amount of people was almost too overwhelming for Claymore but the girl reeled it all in for him. It was a relief, a break from the chaos that was him versus the world.

The two of them, now removed from their glorious eating table, huddled around the small map as they managed their way through the crowds. Every now and then the girl would stop and talk about what’s sold at one shop or what goes on at another. Never once did she actually finish a description before moving onto the next. It was all very confusing for Claymore but not once did he interrupt the girl while on their little escapade. In the end though he was glad to have the company and every little bit of information helped in the long run.

“And here we have the town hall.” The two had stopped in front of a massive white building; its columns holding up the front of the building seemed to be more decorative then practical in Claymore’s mind. “Here you can check for jobs, catch up on important information, and even get one of those passports I believe you were looking for.” The girl turned to Claymore and held out her hand towards the man. “This is where we should part. I think you can handle it from here.”

Claymore reached out and grasped the girls hand in his and both gently shook each other’s. “Thanks for the help. I would’ve been so lost without someone like you with me. By the way what is your name?” It had come to Claymore’s attention that he had never even asked the stranger her name. It almost seemed odd to even ask the question now because of all the time they had just recently spent together.

The girl smiled to the question and gleefully responded. “My names Millie. It’s a pleasure to meet you. What’s your name?”

As Claymore opened the door to the building he was shocked by exactly how many people were standing in line to get their passports. People of all ages, sizes, and races were stacked one by one in the tiny corridor that led to the International Transportation Department. He let out a long sigh as he grabbed the needed paperwork and hobbled himself into line with the others awaiting his turn.

An hour went by and Claymore had only moved about five feet from where he started. Upon counting he figured that at least twenty other people were ahead of him and another fifteen behind him. Then the PA that was stationed over his head clicked on. “Attention! The International Transportation Department will be closing for the weekend in thirty minutes.”

‘This is so not good.’ Claymore knew that with the amount of people in front of him there was no way he was going to make it that day. He had spent all that time with Millie and being engulfed in the surroundings of the new town that he had missed his chance to get his passport for at least another three days. Defeated, he put down the paperwork, stepped out of line, and headed for door knowing that he was going to have to make preparations for the next few nights even though he had such a little amount of money on him.

Just as he was about to open the door Claymore felt a tug on his arm and a small familiar voice. “Excuse me sir. Do you need any help?” He turned around and was shocked by who exactly was calling to him. In the time that Claymore had been sitting around waiting in line Millie had managed to change into formal business attire. Her hair bundled into a bun and now wearing glasses Claymore was utterly shocked by the sudden change.

Before the man could speak Millie reached out and touched the Rune Knight crest on his shoulder. “I see your of the Rune Knights. We have a special line just for them. Follow me please.” She turned and walked to the other side of the floor motioning for Claymore to follow. They had entered a small room that looked just like the Transportation Department but instead of the crest of Fiore everywhere it was the crest of the Magic Council. Millie handed Claymore a small stack of papers before turning around and walking behind the desk where the passport machine stood. “Fill these out and bring them on over to the desk and we’ll get you all taken care of.”