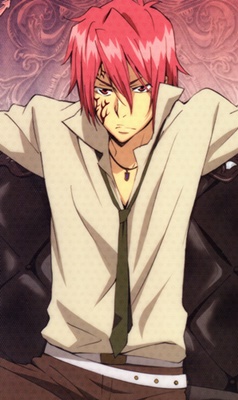 Ardere was walking through the streets of Hargeon, it was a blazing hot day, yet there was a subtle breeze that made it less scorching. He was holding a book in his hand, as always. Being here in Hargeon on business, he wouldn't get to relax very often, so he took advantage of this time to get out and do some more reading. Knowledge was the most powerful weapon, that and flames, in his personal opinion.

He was looking for a place to sit and read, luckily most of the people here in Hargeon didn't use magic, so he was not concerned for his well being sitting outside of some shop or near the docks. As he made his way through the town, he could feel the cool breeze. The only downside was it carried the smell of fish, something he had grown to not be so fond of. The town was known for it's fishin, but damn this was horrendous. Perhaps it was due to some childhood experience, cause most people didn't seem to mind the smell, even tourists. Or perhaps he was one of the few people who didn't actually eat fish.

If I fall back down
you're gonna help me back
---up again
the air's too dense to breathe, bury me underneath the graveyard of bitter grief. 'Cause they forsake and leave me, feeling so deceived, I ain't never got no belief. Can't find nowhere to go. There's just a sense of vertigo. A bitter blow. Circling high and low, in the darkest shadow. Nothing ever seems to follow. All the memories rotten, all the name's that are forgotten. I'm gonna fight and survive; that's the way I feel alive; by froding to darkness.
Ah, Summer. How pleasant were the long days, where the sun shined bright above the earth for hours, scorching everything living and causing immense heat to invade the lands; oh, how pleasant were the bugs that came out with the arrival of the warm weather, only to annoy the habitants of the land by either invading their homes, or by doing a plethora of other things; and let us not mention the massive amount of people who would spend hours on the seaside, bathing in the water... Oh, how pleasant were all those things... not. With a long, annoyed sigh, Janneline Ariel leaned against the tree behind her,  letting one of her knees simply swing around, as the tree branch she had been sitting on for the past few hours could not hold both of her knees... Not because she was fat; it was simply too slim. Closing her green eyes, wincing slightly as the rough surface of the tree made contact with her head, Janna simply allowed herself to enjoy the small moment of peace she had, under the shadow of the tree's leaves, in the calm, solemn park in Hargeon.

Hargeon was a city located near the seaside, so naturally people would go rushing to spend the day at it, escape from the heat of the city and perhaps have some fun on the beach. Janna did not prefer that. Showing off in the middle of the beach, in front of so many people, her Savage Skull tattoo completely visible was not a good idea. She wouldn't have anything against slaughtering them all and tainting the sea in red; no. But she would rather keep her profile low for the time being... Despite the fact that she always walked around with her Savage Skull tattoo visible, mainly due to the fact that she did not have any clothing to cover it; nor did she want to. She liked exhibiting, showing off to the world the ink masterpieces that occupied her pale, soft skin; one of them being the pitch black tattoo on her lower back, and the other, her big, tribal tattoo, which occupied her left waist entirely. Such works of Art she was proud of.

Alas; as she was about to fall asleep on the tree's branch, a distant, unknown voice made her snap out of it and look around, alarmed. She had been pretty sure that everyone was either on the beach; or walking around the city. Who would go to a park? Sighing in complete, and utter annoyance, Janna's eyes snapping open to reveal her calm, grass green eyes looking around lazily in order to find the source of the unexpected noise, only to find it, or rather him, sitting right underneath her, on a bench. Shaking her head slightly, Janna quickly fixed her shirt a bit, before literally wrapping her legs around the tree branch and letting her body "fall", so that she ended with her entire upper body hanging upside down, legs wrapped around the tree branch, her scarlet hair falling like a waterfall of blood. Turning to her left, she whitsled only to catch the male's attention, arrogance noticeable in every action of hers. It's rude to wake people up, you know that? Like very, very rude, and perhaps a tad bit stupid.... Considering not everyone you wake up is sane... Or a good guy... Janna said, a smile creeping on her lips. A dark, twisted smile. The smile of a madman.
❚ WORDS580 - ❚ TAGS @Ardere -❚ NOTES Some notes can go here.
made by jinx of adoxography and GS
_____________________________________________________________________________________ 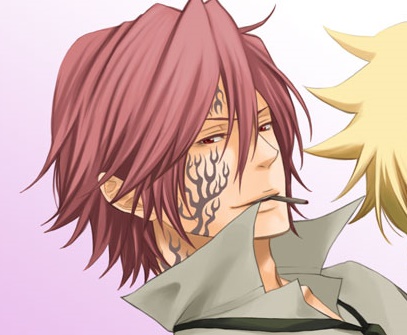 Ardere was minding his own business, reading his book, when a voice interrupted his peace and quiet. It could never be just peace and quiet, someone always had to interfere. The fire mage sighed and turned to see a woman hanging from a tree branch. Certainly an odd sight to see, but not the oddest he had seen. She was an attractive woman, but she was very....creepy in a way, he thought. You must be a light sleeper then, I'm just here, reading a book. The woman with scarlet hair had a strange feeling about her, but no one else was within a sociable distance. What are you doing napping in a tree anyways? Not worried about falling? It did seem kind of strange to sleep in a tree, but he wasn't one to judge. Teach each his own, he always said.

If I fall back down
you're gonna help me back
---up again
the air's too dense to breathe, bury me underneath the graveyard of bitter grief. 'Cause they forsake and leave me, feeling so deceived, I ain't never got no belief. Can't find nowhere to go. There's just a sense of vertigo. A bitter blow. Circling high and low, in the darkest shadow. Nothing ever seems to follow. All the memories rotten, all the name's that are forgotten. I'm gonna fight and survive; that's the way I feel alive; by froding to darkness.
A smile spread on Janna's face. What a curious individual, she had to point out. He apparently had not recognised her, as to the contrary he would have reacted to her presence by either running away from the girl known as a Coming Storm around Fiore, who had gained her fame with grotesque murderers, or trying to sell her to the Rune Knights. Although Janna seriously doubted the petty jail of the Rune Knights could hold her.

This was when she noticed the Rune Knight mark he had, and a sudden desire to laugh invaded her entire being. He was a Rune Knight, yet did not react to her appearance? What a foolish human! It was rumored that the council was ready to pay for her head, yet there he was, reading ever so calmly in her presence. Was he simply new to the Rune Knights, and had he not bothered to learn the essentials, which were, the Guildmarks of the Dark Guilds? That was his essential error number one. And his essential error number two, was, and still is, underestimating Janna, reading ever so calmly in her presence, as if she was a harmless teenager.

Juming off of the tree and landing on the pavement with feline grace, Janna crossed her hands over her chest, a wide smile spreading on her lips. When you are forced to sleep in the devil's den, you tend to become a quite light sleeper, you know. She said casually, as if it was the most normal thing on the earth. She was, obviously, hinting him who he was, in order to see his reaction upon recognising her, upon realising she's a famous criminal. Would he try to chase her, or get reinforcements? She'd like both, and particularly the latter. It had been a lot since the last time she had caused a bloodbath, she missed the feeling of it. Greatly. Allow me to ask you a Question, Mr..... Rune Knight. For how long have you been a part of the Rune Knight Ranks? And how experienced are you, in terms of recognising perillous criminals and dark guildmembers?
❚ WORDS354 - ❚ TAGS @Ardere -❚ NOTES Sorry for the short post. Just no muse for more xD
made by jinx of adoxography and GS
_____________________________________________________________________________________

Ardere was still trying to place the guild mark, he had read so much about them, he should know this he though. Oh yes it was Savage Skull, what a strange name for a guild. Listening to the woman talk, he would lean back a bit and place his book next to him on the bench. He was likely right in his thought that she was a bit off, but he was still interested. It was quite obvious she was a dark mage, probably wanted for some crime or another, but he was just a Recruit after all. Not too long, I'm fairly knowledgeable though. He tapped his fingers on the bench, the strange red haired woman was on the pavement, and he had watched her land. Then again I am just a recruit, without a communications lacrima. So even if I were to stop one of these criminals, not much I could do about it.