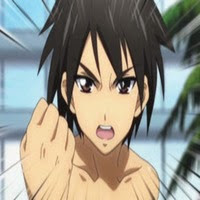 Chaos was laying in bed, waiting for Purpanear to come back."Where the hell is he? It's boring without him here." Chaos thought. Suddenly, he heard someone knocking on the door. Upon opening it, he saw a women in a fancy dress. "Ugh, this is my date? He's not even dressed properly." She was unimpressed. Chaos was completely confused, but then saw Purpanear behind her. "What's going on here?" Chaos asked. Purpanear brought him to the bathroom, the only private part of the house.
"Don't be mad, but I kinda, sorta said you'd do a job where you have to be a date for this girl at the ball." Purpanear said.
"What kind of job is that!? Jobs should be more action-packed, like battling ninjas on a train about to derail into a volcano." Chaos was unhappy.
"Well...you see she couldn't get anyone else to because of her attitude. I think it's kind of sad, so I said you'd be her date! Plus, I don't think there's any jobs where you battle ninjas on a train." Purpanear sighed.
"Well, there's really no arguing with you I guess. She doesn't look half bad, so I guess I shouldn't be complaining." Chaos smirked. He came out of the bathroom and walked up to the woman. "Alright, I'm ready, my name's Chaos by the way, what's yours?"
"I'm not going to even acknowledge that question with a response if you aren't even dressed correctly." She turned her head, walking away.
"Wait! I brought clothes for Chaos this afternoon!" Purpanear opened a drawer and showed Chaos the clothes. "Alright, you have five seconds, five..." Chaos laughed but took the clothes and ran, (tripped and fell on his way too) when he realized she was serious. When she said one, she walked away but was stopped when Chaos touched her shoulder. "Took you long enough. My name's Claire." She said as she walked with him.

"That's a nice name." Chaos complimented her.
"Well it's certainly a much better name than yours." Claire replied back. It was hard to get a conversation going with her, as she'd just say something to end it. Once they had finally reached the ball, Chaos saw an ice cream stand outside. "Let's stop for ice cream!" Chaos proposed excitingly.
"Quit being such a child, tell me, did you ever graduate from elementary school?"
"B-But the ice cream!." Chaos yelled. Claire stepped on his foot with force.
"Quiet! Do you wish to make a scene you fool?" Chaos shut his mouth, hoping Claire would remove ner foot. Geez, the anti fun police called, they want their officer back. Chaos thought of saying that, but didn't want to anger her further. During the dance, Claire kept telling him he was doing terrible at it, she also noticed that he was occasionally looking at the ice cream stand. She was frustrated to the point where she gave up. "If you want ice cream THAT badly, then just get it, and get out of my face." Claire said, angered.
Chaos

Claire walked away from Chaos after that. So Chaos left to get some ice cream. "Fine, I didn't even want to choose this job anyways." Chaos looked at his ice cream, and felt like something was wrong.
"What's wrong with her?" He thought to himself.
"I saw what happened back there." The man at the stand sighed.
"She wasn't always like this you know, she used to a sweet girl, before her mom died that is. She would get easily angry and annoyed, she felt like her mother was the only one she cared about, but she was gone, so she never felt the need to care for anyone else again." The man frowned. Chaos then looked at his ice cream again, thinking about his own parents.
"You haven't tasted your ice cream yet, something wrong?" The man asked.
"Yeah, and I'm gonna fix it, that's what the job requested after all." Chaos replied triumphantly.
Chaos

Chaos went back to the ball with his ice cream and saw Claire sitting alone. He walked up to her and handed her the ice cream he was going to eat. "Is this supposed to be some kind of pity gift? Well, forget it, you probably already licked it too." Claire looked away. Chaos then hugged her.
"What are you doing?" Claire tried to escape the hug.
"I know what it's like, to lose a pare-" A sword came out of Chaos's back, so he stepped back and was shown to be in pain, but didn't scream. He was hoping not to cause a scene. People began to look at him, clearly being in pain.
"I'm a mage too ya know." Claire smiled. People began talking as Chaos fell to his knees, holding the sword. Claire's smile quickly turned into a frown, she began to worry. She made the sword disappear and walked closer to him.
Chaos

"H-Hey, are you okay? I didn't mean for it to be THAT bad." Chaos slowly stood up and hugged her again. "Why don't you learn your lesson? You're going to stain my clothing." Claire said, trying to get free again. "I know what it's like...to lose a parent." Chaos said as he began remembering his father and the fun times he had with him, leading up to his death. He shed a tear. Claire broke free of the hug, only to see Chaos leaking with blood and tears from his eyes. Claire actually began to feel bad, she thought of her past actions and began to regret making them. "Well, you suck at dancing, so I'll teach you." She held out her hand, so Chaos took it and they began dancing once again. She criticised how he moved again, but this time, it wasn't to be mean. Chaos even saw Claire smile every now and then.
Chaos

When it was time for the ball to end, Claire hugged Chaos. "Well, thanks for the dance."
"No problem, next year I might do it, even if the reward is 50% off-" Claire stepped on his foot again. "I'd prefer it be for free." Claire said smiling as she was still stepping on on Chaos's foot. When Chaos came back home, Purpanear tried to hold in his laughs. "So, how'd it go?" Purpanear asked.
"It went pretty well, her personality did a 180 thanks to my perfect flirting skills." Chaos bragged. "You mean the skill where you get stabbed through the back?" Purpanear laughed. "Wha-Wha!? How'd you know?"
"I'm friends with the guy from the ice cream stand."
"Really? Well maybe he could hook us up on some free ice cream!" Chaos proposed.
"Yeah, sure if you want him to lose his job..."
« View previous topic · View next topic »