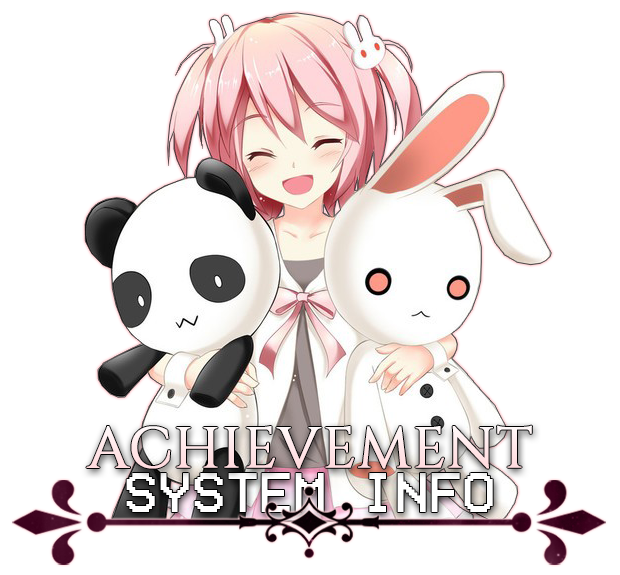 Achievement badges are obtained from obtaining something specific in game. It could be a staff position, a certain magic, winning a contest, etc. It will be presented in your profile, and message posts. Legacy achievements are for old site features and not given out any longer.

Only admins can give out badges.

- Alt Account
This is one of your alternate accounts (can help people track alt accs).

- Character
Get your character approved

- History
Write out your character's history in the Character History board

- Pet
Get your character a pet

Example:
It was either June or July—it could have been January, even…one of the ―J months—when I was picked up by the cops on Court Street in Newton after my mother had called the police when I went missing. I had only been gone for ten minutes, and I was going to go to my friend‘s house, too. I really was! I told the one female of the three cops I had left my therapist‘s office after she showed me a needle I had thrown out and my mother had found. ―Would you go through someone‘s trash? I asked the trinity of cops. It says something about my mother and my relationship with her, it really does. And you know, I remember thinking as the Ketamine was coming on that day that I was going to be in trouble if I put that needle in the trash, but I did it anyway. I at least made an effort to cover it up, though. It‘s not like I wanted to be caught. It‘s been asked of me before; I always mean it when I say I didn‘t do it on purpose. However, it may have been to my advantage to be caught, because I was in debt to the vet where I had stolen the K, but no one knew that but me.

-Excerpt from Eating the Screw by Andrea Benjamin.

Example:
Riddle had been rich, snobbish, and rude, and their grown-up son, Tom, had been, if anything, worse. All the villagers cared about was the identity of their murderer -- for plainly, three apparently healthy people did not all drop dead of natural causes on the same night.
The Hanged Man, the village pub, did a roaring trade that night; the whole village seemed to have turned out to discuss the murders. They were rewarded for leaving their firesides when the Riddles' cook arrived dramatically in their midst and announced to the suddenly silent pub that a man called Frank Bryce had just been arrested.
"Frank!" cried several people. "Never!"
Frank Bryce was the Riddles' gardener. He lived alone in a run-down cottage on the grounds of the Riddle House. Frank had come back from the war with a very stiff leg and a great dislike of crowds and loud noises, and had been working for the Riddles ever since.
There was a rush to buy the cook drinks and hear more details.
"Always thought he was odd," she told the eagerly listening villagers, after her fourth sherry. "Unfriendly, like. I'm sure if I've offered him a cuppa once, I've offered it a hundred times. Never wanted to mix, he didn't."
"Ah, now," said a woman at the bar, "he had a hard war, Frank. He likes the quiet life. That's no reason to --"
"Who else had a key to the back door, then?" barked the cook. "There's been a spare key hanging in the gardener's cottage far back as I can remember! Nobody forced the door last night! No broken windows! All Frank had to do was creep up to the big house while we was all sleeping..."

-Excerpt from Harry Potter and the Goblet of Fire by J.K.Rowling.

Example:
The Palace was a small and, I suspect, a rather shabby theatre ; but when I see it in my memories I see it still with my oyster-girl’s eyes - I see the mirror-glass which lined the walls, the crimson plush upon the seats, the plaster cupids, painted gold, which swooped above the curtain. Like our oyster-house, it had its own particular scent - the scent, I know now, of music halls everywhere - the scent of wood and grease-paint and spilling beer, of gas and of tobacco and of hair-oil, all combined. It was a scent which as a girl I loved uncritically; later I heard it described, by theatre managers and artistes, as the smell of laughter, the very odour of applause. Later still I came to know it as the essence not of pleasure, but of grief.

That, however, is to get ahead of my story.

I was more intimate than most girls with the colours and scents of the Canterbury Palace - in the period, at least, of which I am thinking, that final summer in my father’s house, when I became eighteen - because Alice had a beau who worked there, a boy named Tony Reeves, who got us seats at knock-down prices or for free. Tony was the nephew of the Palace’s manager, the celebrated Tricky Reeves, and therefore something of a catch for our Alice. My parents mistrusted him at first, thinking him ‘rapid’ because he worked in a theatre, and wore cigars behind his ears, and talked glibly of contracts, London, and champagne. But no one could dislike Tony for long, he was so large-hearted and easy and good; and like every other boy who courted her, he adored my sister, and was ready to be kind to us all on her account.

-Excerpt from the book Tipping The Velvet by Sarah Waters.

- Zodiac Key
Obtaining one of the twelve Zodiac Keys

- Wanderer
Do threads and/or jobs with 7 different characters

- Eevee
Change a magic on a character

- Working Together
RP with the same person in 3 different threads

- Teaming Up!
Have a registered team.

- Limited Edition
Own something from the IOTM shop.

- Idolize
Appear on the front of Sorcerer’s Magazine.

- Unknown Powerhouse
Have a character reach A and never be a CS, or RS.

- Unknown Legend
Have a character reach H and never become a Warlord, or WS.

- Innocent
Be declared Innocent by the Rune Knights after an investigation.

- Guilty
Be declared guilty by the Rune Knights after an investigation.

- Pardoned
Pay your fine, or complete your time after being declared guilty by the Rune Knights.

- The Completionist
Have completed one job of every rank.

- World Traveler
Completed a job in every country.

- Helper
Have a suggestion approved by staff, thanks for helping the site!

- Guild Creator
Create a site guild and have it be approved by staff.

- Achiever
Have 5 or more Achievements.

- Expert Achiever
Have 25 or more Achievements.

- Over Achiever
Have 50 or more Achievements.

- Monty Python
Intentionally fail a 100y job, must hit WC, and do not get rewards.

- Obligatory Beach Episode
Have your character visit the beach with 2 or more other people.

- Shipped
Prove yourself to be in an official FTRP ship.

- Sticking Around
Active on FTRP for over a year.

- Loyal to the Bone
Active on FTRP for over 3 years.

- Solo Artist
Has Solo'd one job of each rank.

- Taskmaster
Has taken part in over 3 Site Events.

- Collector
Have an IotM (Item of the Month) for every month of the year!


ITEM OF THE YEAR REWARDS

- Dark Guild Ace
Become an ace of a dark guild

- Warlord
Become one of the Warlords of Fiore

- Villain
Successfully prove yourself as a villain

- Legal Guild Ace
Become an ace of a legal guild

- Rising Star
Obtaining a position in the Risings Stars

- God of Ishgar
Gain the god title of the Wizard Saints

- Hero
Successfully prove yourself as a hero

- Neutral Guild Ace
Become an ace of a neutral guild

- So Extra
Have a thread set in space

- Veteran Level 1
Loyal to the site, and active

- Veteran Level 4
Only Seijin can choose who deserves this badge

- Veteran Level 5
Only Seijin can choose who deserves this badge

- Veteran Level 6
Only Seijin can choose who deserves this badge

- I Have Friends...
Have someone on your friendlist. Not your alt!

- Have an Admin as a friend!
Have Johann, Markus, Nessa or Sivvy on your Friend's list