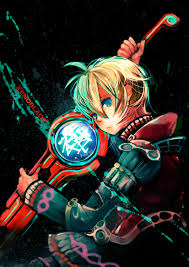 Shulk walked out of the amazing but still under repairs Lamia Scale guild hall on a way too sunny morning to go on the most exciting adventure anyone could go on, getting a passport. He walked to the place he was told to go and saw a line that was about a mile long, well not really but you get the point. He decided to go get some breakfast while he was out, and maybe the line would be shorter when he came back, and so he could stay out of the sun. After eating some delicious pancakes and bacon from a local cafe he went back to the passport place and the line had only gotten longer. He decided to tolerate the dastardly sunlight and wait outside in a line, hoping it wouldn't take forever. He took out some machine parts and started messing with them, and eventually made a stopwatch. How, we will not ask. He started it to see how long it would take for the distance between him and the desk he got his passport to become zero. Then an idea popped into his head. Why not just speed up time?! He closed his eyes, and focused all his energy on changing times speed. When he opened them he looked at the stopwatch was going half as fast. He cursed at himself under his breath, realizing he just slowed time down instead of speeding it up, making his trip twice as long. He sighed and walked away, deciding to go to a machine shop and buy some stuff until time went back to normal. He took a few parts and left money on the counter, hoping that he wouldn't be hunted by the police for 'stealing' even though he left the money there. Wait, how will this look on the lacrima cameras? he though to himself. He shrugged off the thought and went back to the line. This may seem rude to some, but Shulk was way to tired of waiting. He went back behind the same person he was behind before, who had barely moved up the line, and looked back at the tons of new people who came up. Then, as if on cue, time went back to normal, which left Shulk slightly dizzy due to the magic power it drained from him. He looked at the line, which was barely shorter, and sighed. hr decided to look at his stopwatch, and saw that it stopped working due to the confusion of the halved time and normal time, so he threw the watch away. Seconds later he heard someone yell, "Who threw that?!" Shulk decided it'd be best to stay his usual quiet self. After another half hour or so he was at the front of the line, told the person all the info he needed, and got his passport. Finally, what an exciting first job... he though to himself sarcastically. He thanked the person when they gave him his passport and walked back to the lovely, slightly broken, Lamia Scale guild hall.
« View previous topic · View next topic »