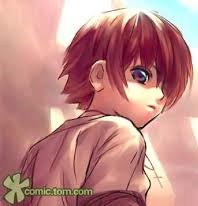 Name: Shiro Cavanaugh
Gender: Male
Age: 12
Birthday: May, 5th
Sexuality: Straight
Special Characteristics: Has a star shaped birthmark on his back. It looks similar to a bruise but it is just a simple proof of his lineage.


Personality:
Shiro is a very laid back and calm individual. While being generally "go-with-the-flow" Shiro can easily get distracted or angered if he or his friends are insulted. He is kind, not hesitating
to risk his own life to help his comrades. He is rather naive due to not leaving his small village to see the world. His flaw is that Shiro is easily distracted and has a huge sense of pride, not being able to back down from challenges. He grew up near the forest and has been hunting and fishing most of his life. His senses are average but he has very keen reflexes. Shiro tends to doubt himself and let his confidence waver. However, he still is working to motivate himself step by step. His dream is to join a guild and become one of the most powerful wizards in the guild as well as make friends. He wants to join Fairy Tail.


Dislikes:
The color Orange, blackberries, and bananas.
His hatred of bananas is due to his dislike of the slimy, soft texture. He thinks bananas are just plain gross.

Fears:
Snakes.
Ever since he was nearly bitten by one as a child he has had a growing fear of snakes. He is afraid that someday a poisonous snake will bite and kill him. He doesn't know that all snakes
aren't poisonous.

General Appearance:
He is a rather short light-skinned boy of below average weight. He has red freckles and shaggy red hair. He has a slim build and dark blue eyes.

Height: 4'8"
Weight: 39.9 Kilograms
Hair: Red
Eyes: Dark blue
Skin Tone: Light
Appearance: Wears a long-sleeved red shirt with a star on the front of it. Similar to his star shaped bookmark on his back. Over his long-sleeved shirt he wears a cream colored t-shirt that is of average length. He wears reddish-brown cargo shorts and red socks. His shoes are black sneakers with white laces. Sometimes he switches into his alternate outfit which is a black cat hood with a pink button down shirt that looks like a blouse (which Shiro gets teased about a lot).

NOTE** Shiro is now apart of the Lamia Scale guild. He recently joined and is looking forward to making friends with the mages there.
--Cookie__

Re: Introducing my character! ~Shiro Cavanaugh

I can’t wait to role-play with you though! ^~^ And don’t forget to hang out in the Cbox a bunch even though everyone is a bit crazy! xD Oh, and don’t forget to read through the Rules and Manual thoroughly despite how boring they may be x-x

Haha thanks, yeah I will add some information about myself. Also I'll try and post it in the registration area! Looking forward to roleplaying with you too! :)
« View previous topic · View next topic »