Apollo finally made it to Hargeon.  Apparently the boy from Saber Tooth he bumped into has requested his help with some work.  Of course Apollo accepted because he was never one to turn away someone who needed help since he would want the same if he asked for help.  Apollo wasn't to sure about taking this job certain that there would be a fight involved but non the less gave his word that he would assist him with it so he decided to head out to the spot where they to meet.  It was a nice day in Hargeon much like the last time he was here.  Though he couldn't figure out Why someone from Saber Tooth was asking a Fairy Tail wizard for help when he could ask his own guild.  Though he was hear now there wasn't much point in fussing over it.   Perhaps he will ask later but for now Apollo was ready to help since he said he would. "Stopping some Bandits huh."  He muttered to himself thinking his skill for noticing things might come in handy here.  "As he got closer to the meeting point he could help but wonder about his magic after there talk wondering how it worked in general but soon shrugged it off figuring he would soon learn for himself. "Ah well here I am" He said as he arrived at the meeting spot he looked around for him waiting for him or at the very least trying to spot him.
_____________________________________________________________________________________ 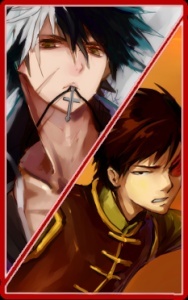 Kitteh was biking through a city when he got through to the one he wanted after being here just a bit ago there was only a bit of a travel he went through a store that tried to sell him a toy robot and a light yellow flower when he had to tell them he had a great interest in knives. He was beat up by two store guards and a trained cat and kicked out of the store. Kitteh walked a bit more and that is were he was now he walked down to the meeting place the giant plaza and walked down an aisle and found the place it was so giant when he found his partner he waved side to side and smiled the best of smiles."Hey whats up he called for Apollo and chucked him a stick of gum Kitteh tilted his head and all of his hair fell to one side and he fell into a man, He got back up and started shuffling over to the place he would meet. THe distance was farther than it seemed and he finally got there.
_____________________________________________________________________________________

Apollo looked over as he heard his name called knowing who it was instantly.  Apollo watched Kitteh stumble over to him.  He looked a little confused watching him approach him the shugging he looks up at the sky for a moment. Apollo wondered at first if he was ok but then watching him get up Apollo seemed less worried and gavee a sigh.  Then he looks at his silver pocket watch they over to him "Right on time"  He sighs closing his watch then putting it away.  Then looking back Kitteh Apollo tilts his head.  Nothing really Kitteh pleasure to see you again..." Apollo responded as  Kitteh reached him.  "So what s this job you said you needed  help with you just told me something about bandits."  Apollo said holding the note  he recevied out in front of him tilting his head abit.  Even though Apollo already knew everything about this job he wanted to make sure Kitteh knew exactly what he signed up for.  As he waited for his answer Apollo put his hands in his pockets observing his surroundings.
_____________________________________________________________________________________