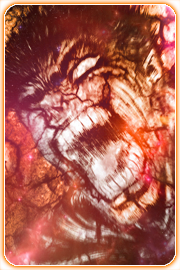 Conrad sat underneath the tree, taking a break from training. He wiped the sweat from his brow and pulled a small metal flask from a belt pouch. Opening the flask unleashed a horrid smell that burned the nostrils of anyone that smelled it. Conrad took a big swig and capped it, laying back he looked toward the sky only to be met with the gaze of a strange man above him. The two looked at each other with confused looks. Conrad looked back at the container of booze and back at the man in the tree.

The two locked hands in a match of strength, neither gave in to the other gripping harder and harder. Conrad heard a small pop and let go turning around he grabbed his hand in pain.

Conrad swiftly threw his sword Ragnarok in front of Ezeakieal.

" How about you just come to my place, we have plenty of food there. " Conrad yelled

He calmly walked over to his sword and retrieved it.

" This way. " He gestured while lifting his sword over his shoulder and began walking off.

After some time walking the reached a large house made from a tree.

" Welcome to my home. " Conrad said presenting the house with his hands.

Conrad lead Zeak into the house they walked through the door presenting a large multi-layered tree house. The house and all the furniture was delicately carved from the tree.

" Just have a seat anywhere. " Conrad informed Zeak while setting his equipment down.

Conrad walked into the kitchen and retrieved large plates of breads, meat, and other small additives.

" Here's some food. " Conrad said as he relaxed and grabbed his own.

Ezeakieal was in aw of the beauty of Conrad's home. The great tree stretched out forming into the shape of a home. When Conrad took him through the hollowed out house he noticed that most of the fine furniture was growing out of the tree. "This place is amazing now I know. I really, really have to get me one of these." They arrived at the kitchen and Conrad laid out a feast fit for a Wyvren. Ezeakieal started to drool a little "Hold on." He ran outside and from inside the house Conrad heard the sounds of something extremely heavy hitting the ground. Ezeakieal rushed back inside and took a seat. "What was that?" Conrad questioned. "My training weights." Ezeakieal replied as he picked up the fork and knife.

"Your what now?" Conrad coughed out

"They weigh around 250 pounds each, and theirs only about six of em." He looked at Conrad. "What too weird?"

"That's a neat trick, only way for me to burn off fat it to work it off." Conrad said finishing his food.

"Sure i guess but i'll let you know that i can take quite the beating." Conrad said finishing his workout.

He removed the weights from the sword and readied himself for attack. Conrad swung without warning but Zeak quickly dodged. Zeak lashed back with a counter attack swinging toward Conrad's face, when Zeak's punch connected so did Conrad's which came in contact with his ribs.

"You got a pretty strong body yourself." Conrad blurted while spitting blood from his mouth.

Conrad was unlike fighter Ezeakieal come up against he had no particular style, he just reacted to the attacks and acted accordingly. Ezeakieal threw a series of lightning fast punches while having to dodge his blades advances. Ezeakieal rolled in with a scissor kick but it was quickly routed by Conrad's sword as he dropped it into the ground. Ezeakieal grabbed the ground and threw himself around to Conrad's side. Conrad swung his long sword at Ezeakieal's gut kicking up dirt at him. Ezeakieal leaped up, his feet just inches away from the tip of the blade. With out thinking Ezeakieal followed up with a jump kick to Conrad's face. Conrad noticed the change in Ezeakieal's movements, he tilted his blade to it's flat side and hit each other in the face. Ezeakieal's head slammed into the earth leaving a dent in it as Conrad rolled several feet away from the impact.

" You fight good, i think we would make a great team. " Conrad laughed spiting a little blood from his mouth.

" Why not, were both in the same guild. " Zeak replied.