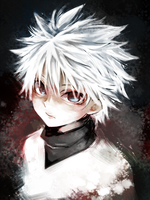 Player Requirements: Must be at least 10 posts long; at least 150 words per post

Job Description: Assist an old man named Bartre and his son Ninko build a wooden cottage atop a snowy mountain. The house being built is a gift for Bartre's daughter Nino, who's going to be married in a few months. Though they live in a magical world, Bartre does not believe in the use of magic to get a job done; and requests that the mage or mages helping him help build the cottage without using any magic.


A small shadow moved from the darkened corner of the Tartarus guild hall, closing in on the solid wooden board on the opposite side of the room. His footsteps barely making any sounds, only noticeable to some one in the direct vicinity. He continued to slowly, but methodically make his way towards his target. Upon getting there, the board was littered with all kinds kinds of strange requests.

"Ugh.....come one..." Jubei would say to himself, as he briefly read over each job on the board. There were all sorts of  application on the board desiring the help of a Mage. Some specifically towards his guild, and some for every guild. There seemed to be nothing of interest, but a bunch of cupcake jobs. Rescue my stranded kitten, orWork for Taco Mama, what kind of lazy jobs were these? Where was the danger, where was the adventure!? Jubei shook his head in disappointment, and almost turned away to begin his daily exercise routine, when a specific piece of paper caught his attention.

"Hmm? Thats an interesting flyer" Jubei spoke out loud, to the empty hall as he removed the paper from the board. It was a picture of a cabin on the top of a mountain, complete with thick layers of snow every where. This seemed perfect to Jubei, who was always craving a physical endurance or strength test more so than a magical one. Immediately, the young Mage grabbed his katana and made his way to the entrance. He burst through the doors, with a sly smile as he strapped in his sword, and began to charge towards the north gate. He had only been a member of Tartarus for a small amount of time, however he was glad he joined. The old kingdom stood in magnificent and quiet glory, as the only sounds usually heard, are from nature itself.


The trek was long, and filled with troubling creatures. A strong portion of the path was either blocked some how, or destroyed in some particular fashion. Because of this, It took a little longer to reach the bottom of the mountain than he expected. However soon Jubei began to approach the mountain, as he removed his shirt that was damp with sweat. Jubei tied it around his sash, and picked up a hand full of dirt. After tossing the dirt back and forth in his hands, he tossed it back onto the ground. The dirt acted as a fine dry powder, to help keep his hands from slipping. The young mage then clutched the first rock he could find, and began to make his way up the massive mountain. There was possibly a better, more convenient way for travelers to reach the village on top of the mountain. However, convenience was something for the weak willed, believed Jubei. The only was he was going to become stronger, is to accept every challenge he comes across, and make some as well.

"Ha.....ha....ha....come on."Jubei was panting heavily as he was roughly half way up the mountain. He had been climbing for several hours now, and felt like days. His muscles began to assert its pain to him. Alerting him that he had to hurry. After a little more motivation from himself, he continues to push up into the mountain. The temperature was steadily getting lower and lower. There was a small blizzard in the middle of happening, and the thick snow flakes combined with the strong icicles made for a deadly training exercise. He stopped thinking about it, and just continued to raise his hands and pull, constantly shouting,Go!, inside of his head. After what seemed like several decades,  Jubei's hand reached the edge of the cliff and he pulled himself up. The young mage simply rolled over once he made it to the top. He was so sore and tired he didn't think he would be able to move his arms for some time. His body was giving off such a powerful level of body heat from the exerted force, that the snow under him melted almost instantly. As well as all the snow flakes that landed on him as he laid there. Before he knew it, he was being dragged by a random passerby, and pulled into a near by building.


Jubei began to close his eyes as he was continuously dragged in the snow. It didn't take long however for his tiny child form to be dragged into the nearby house. Immediately upon entering the home, a blanket of pure heat wrapped about him, igniting his pores. He was still some what resting, although his body began to heal at a much faster rate. Within several hours, the young mage with the large Afro awoke near a blazing fire place. He looked about curiously, unsure of what happened to him.

"I see your awake? That didn't take long at all." Comes a rather cheerful, yet powerful voice from behind Jubei. He turns to find a very large man wearing thick clothes and boots, with a large brown beard."Your pretty crazy, reckless, and amazing haha. They really dont make kids like you any more."The man continued to speak as he placed a warm cup of tea directly near Jubei, who was wearing his shirt, freshly dried of all the sweat from before.

"I guess I have you to thank. I am Jubei."Jubei said to the older looking gentleman as he accepted the tea gratefully. They man introduced himself as Bartre, and Jubei's ears perked up with glee. He found a way he could help payback the man, who was just mentioning his inability to find adequate help in these parts. After finishing another sip of tea, Jubei began to offer his help and give mention that he was headed here specifically to do the job anyway. At first, Barte seemed a little uneasy about letting a 12 year old do such intense manual labor in these conditions. He however quickly agreed, when he realized what he just witnessed this child doing.

"Haha, Perfect, we have really been needing the extra hands. We shouldn't be working too much longer with your help." Bartre said in his usual cheerful voice. After finishing his tea, the two men decided to make their way towards the cabin being built. Currently his son Ninko was already there working away diligently.

The two of them walked silently, with their hands in their pockets and faces shoved into their jackets. The blizzard had only let up slightly, and they were climbing even higher up the mountain, to the very peak. The snow was thick, and every step would sink Jubei in several feet. This was particularly annoying for a 4'11 young man. However, he simply saw this as more physical training as his legs began to grow stiff with soreness.

"Here we are!"Bursts a loud bellowing sound coming from Bartre as he begins to wave at the man in front of them. Jubei looked forward, only barely could he make out the images from the thick flurry of snow coming down on them. The continued to walk a bit, before the whole scene popped into view for Jubei. He could see the house being half way complete, however the snow was coming down pretty fast, and was constantly entering the home its self.

"Hi!....uhh, thanks for coming to give us a hand."The young Ninko came running over in excitement to see his father return with some help. however his excitement soon turned to obvious disappointment when he laid his eyes on the child before him. Too used to this kind of reaction, he didn't even bother to give an explanation to either of them. He simply just responded to Ninko in a business like manner.

"Yeah, don't mention it. We all have to make a living some how."Jubei said as he walked off, leaving a fact that he is simply doing this for payment. Although he was also repaying a favor to old man Bartre, this was not for fun. Instantly he began stretching and preparing to get the job done as soon as possible. He walked over to the house and picked up the first stack of lumber and began moving them to their proper location. Bartre and Ninko stood there in shock, as they had to share the load of each stack together. Even then it still weighed far more than they could truly handle. They realized this job wasn't going to take any time at all, and quickly rushed to help Jubei. Several days passed, and the home started to really take its form. Bartre were constantly throwing praises onto Jubei for his needed assistance, knowing without him they were doomed to failure. Now the day came, when the job was fully complete, besides a few small lingering details. Jubei walked off shaking hands with Ninko whom stayed at the cabin to finish the last few items on the list.

"I cant thank you enough for what you have done for me and my family." Bartre said as he and Jubei finished making their way down from the peak of the mountain. Jubei and Bartre said their good byes, after receiving his payment for the job at hand. Jubei thrilled for his sack of jewels decides to purchase a small flagon of wine, as well as take the caravan down the mountain for a little relaxation.