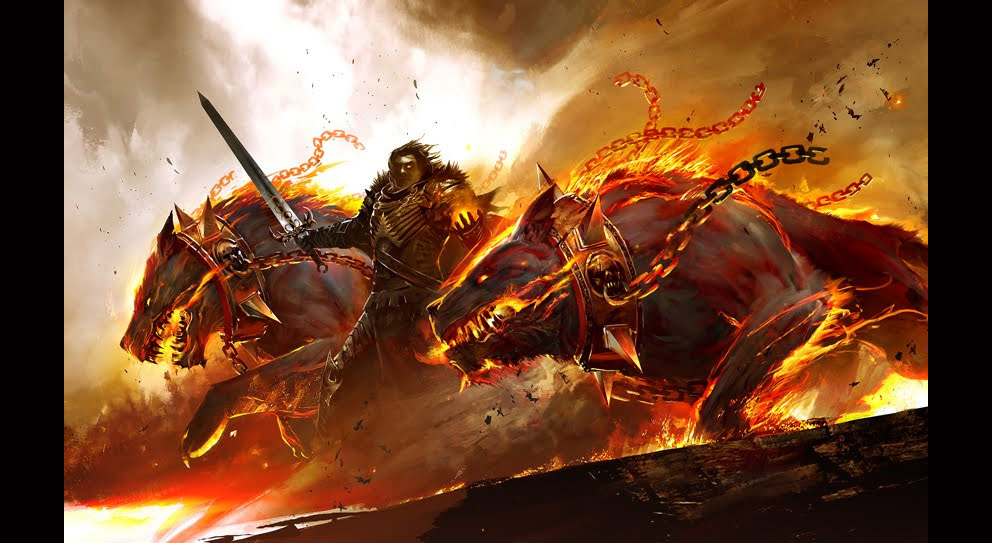 With a vague black steam exhausting from their very eyes, and saliva black as tar dripping from their jaws. It seems that the primordial beings Fenrir and Skoll embody the very essence of darkness itself. However, that endless void is being replaced with a fiery hellfire pouring from all over their body the moment they launch a devastating assault.

Just like the other Garm, it's not really known where they came from. Where they there first, it seems so as they are significantly older then most Garm. Did they just came to be? Molded by darkness and fire itself. No on knows, but one thing is sure, they'll skulk in the Savage Skull catacombs and only beckons to their master's call.

While their strength far exceeds any normal Garm, their speed and size remains mostly the same. They might be a tad larger or so, large enough to easily topple a car.

Shrouded: Like all Garm Fenrir & Skoll can move unnoticed in the shadows. May it be an alley or a dark woodland area. And are only detectable by light/holy mages from B rank and up.

Fiery Ablaze:When going into full attack, their darkness is being replaced by a blazing hellfire. Which would negate every shroud they have. Because it's hard to miss a giant hound on fire. The hellfire doesn't do any damage at all. However it is hot enough to easily melt away any ice construction. May it be of natural causes of magic. But nothing above A rank.

Name:
Howl from beyond the grave
Rank:
A
Description:
Just like all Garm, Fenrir and Skoll can let out a tremendous howl striking fear into the enemy mages. Reducing their current damage output by 30%. However this only affect A rank and lower full on, S and SS ranked wizard attacks are only reduced by 20% while H rank is not affected by it. It can only used once per thread and lasts for 5 posts.
Strengths:
- Damage reduction for almost all ranks
- The Fear affects only enemy mages. Meaning that allied mages from Savage Skull are safe
- Good combo with attacking the enemy head on
Weaknesses:
- S, SS and H rank are less affected by the fear
- Only used once per thread
- Because it are two beings they have only access to one spell
- Mages from other dark guilds are still affected by it, even those sharing an alliance with Savage Skull
Yvonne

Re: Fenrir & Sköll, The primordial Garm