On a normal summer day at the guild hall, Alex decides to check out some jobs. As Alex walks up to the board he notices a job different from the other ones. A job named "Find those Puppies" Alex thought in his head, "Well this seems like an easy job, and look! A nice pay out too!" Alex grabbed the job at the exact time time a new guild hall member grabbed it. Alex stared at him intensely, after a whole 5 minutes of dead on staring Alex started to pull the paper attempting to get it away from the guild member. As Alex pulled he pulled too, Alex was getting seriously annoyed at this. So he walk up to the bar tender as he said,"This guy wont let go of MY job.." The bar tender just laughed as she told Alex and Blake to go on the job together. They looked at each other and said,"Sure."
likeaboss756 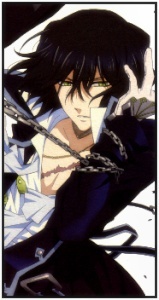 Blake walked down the street to the clients house a little annoyed that the bartender made him go on the job with him. He looked at the boy, he was the same age as him just a little taller. He huffed and looked away. He noticed Alex looking at him, he paid no attention to him. He looked at the sign and they still had quite some time to go before they arrived. He decided to throw some rocks at the passing trees, he had nothing to do but walk. He occasionally looked over at Alex to see what he was doing. Blake began to read to pass the time, he eventually got bored and put the book away. He had small talk with Alex and began to enjoy traveling with him. "Finally, we're here!" Blake exclaimed throwing his hands in the air. They walked up to the door and knocked. "Yo Alex, I guess this won't be so bad after all."

Blake took off down the street chasing after four puppies while Alex chased the other three. One of Blake's puppies tried to turn away from the pack so Blake tried to grab it but he tripped and hit the ground. All but one of the puppies disappeared so he got up and began to chase it. Blake ran full speed down the road after the puppy. The puppy crawled under a fence and kept running. Blake approached the fence and jumped right over it still chasing the puppy. The small creature weaved in and out of people walking down the streets. Blake avoided these people and continued to chase the puppy. "This is getting crazy, I can just grab" Blake dove onto the street and slid into a wall. He r him from he rubbed his head, "Well that wasn't so hard." He looked at the puppy's collar, it read "Cooper." He began to walk down another street to look for another puppy.
xXSpiritXx

After receiving the quest from Mr.Nakyama Alex started towards an ally. He searched around, look everywhere. Once Alex started to leave the ally he heard a rumbling in a trash can. Alex ran to the trash can and just when he opened it, a puppy jumped out knocking Alex over as the puppy ran for his life. Alex stumbled to get up and he sped after the puppy. Alex took a sharp turn and right before he grabbed the puppy, another puppy jumped on his head and jumped onto another building. The puppy in the corner started to run and right before he got out of the ally, Alex stuck his leg out and stopped the puppy then grabbed it. Alex looked at the dog time, it said, "Cocoa."Alex then said, "Alright! I got my first puppy!!"
likeaboss756

Blake walked around looking for another puppy when suddenly he saw a small animal eating food out of a barrel in the store window. He walked inside the store and tried to grab the barrel when someone approached him. "You can't steal things young man." He started to push Blake out the door. "But I wasn't.""There's something I need to.""Would you stop pushing me!" Just like that, Blake was back outside. "How can I get that dog?" He thought. "I know, with science!" He laughed evilly and went behind the store. He came back out with a machine that looked like a cross between a net and a fist. Blake ran up to the store window and used the machine to punch through it and grab the puppy out of the barrel. "I got him!" He read the collar. "Donald". He dropped the machine and ran the other way.
xXSpiritXx

Alex was cautiously walking down the street looking for some more puppies to capture. On top of a building was a puppy head deep into the chimney. Alex jumped onto the building and right before Alex grabbed it, the puppy fell down the chimney. Alex ran to the front door knocking on it. The family inside just wouldn't let Alex in to grab the puppy. Alex thought of one thing to do.. He jumped down the chimney and grabbed the puppy, he worked his way all the way to the top of the house. Alex looked at the dog tag and he saw the name "Parker." Alex said "Alright lets go Parker!"
likeaboss756

Blake was walking with his two newly acquired puppies. He saw something floating down the canal. He ran after it, and turns out it was another puppy. "I'll save you!" He shouted at the dog. he ran up to the side of the river and found a trash can on the edge. Blake quickly grabbed the trash can lid and jumped over the edge placing the lid beneath his feet. He surfed after the puppy who was quickly going downstream. He tried to reach out to him several times but with no success. Blake found two sticks floating and the canal. He grabbed them and used them as a claw to grab the puppy out of the stream. He then jumped back onto the land as he read the dog's name tag. It read "Joey." He was running down the street with three of the puppies when something caught his eye. He began to chase the object.

Alex felt proud for actually catching two puppies, after he finished gloating to himself he noticed a tug on his pant leg. He looked down and saw a puppy, as he reached down for it the puppy bite Alex's finger hard. Alex yelped in pain and rolled around on the floor, he got a devilish look in his eyes and the puppy ran. Alex stepped up and got serious, he ran after the puppy in full speed. Alex took every turn precisely, he was focused and determined to catch that puppy. Alex jump and dove after the running puppy, Alex grabbed it, tucked it in, and rolled out. Alex looked at the tag while it said "Popper." Alex said "Popper your coming with me.."
likeaboss756

Just as Alex turned the corner.. BONK! He ran straight into Blake who was chasing after the last puppy. After 10 minutes of being knocked out, Alex woke up to an unpleasant sight of being licked by the puppy, Alex then reached for the puppy but it sprinted away in a quick hurry. Alex was furious, Alex got up full of anger and chased after where ever he thought the puppy ran off to. After a couple minutes of running to the place he thought the puppy went, he noticed there was a dead end and no puppy. Alex just decided to give it a break and wait for the puppy to come to him, after waiting for a while Alex felt dazed and passed out again.
likeaboss756

Blake woke up. He remembered crashing into Alex. He rubbed his head. "Jeez, how many times can a guy hit his head in one day?" He saw the puppy but no Alex. "Where did he run off to so fast?" He got up and began to chase the puppy. "Yo puppy, what did you do with my friend?" Blake sprinted after the puppy and tried to dive for it a couple of times too. No matter what he tried the puppy was faster than him. "I need Alex to do this, maybe he's better at it." "It doesn't matter, I've gotta get that puppy." Blake ran after the puppy until it lead itself into a dead end. "Ha, I've got you now you dumb puppy!" "You're coming with me Ricky." Blake ran around the town and began to look for Alex. "I hope he's here somewhere." "Where the heck could he be?"
xXSpiritXx

Alex now woke up from his one hour nap of laying there, after he got up he was hoping Blake caught the last puppy. Alex stood up proudly and started to look for Blake hoping to find him. Alex ran through out every single one of the ally ways and streets building but he just couldn't seem to find Blake. Alex then went in and out of every single building and he still couldn't find Blake. Alex jumped from every building and tops of houses and he just couldn't seem to find Blake still, Alex then went on top of the grand clock tower and layed down for a while hoping Blake will find him. Alex knew out of everyone Blake could to it, they have a special connection.
likeaboss756

Blake searched all around the town looking for the guy he literally meant just like three hours ago, but for some reason he felt they had a special connection. It was weird but he almost felt like he could sense Alex. "The clock tower!" He told himself. He immediately turned towards it and at the very top Blake could make out a small figure. It was Alex, "Well that was easy." Blake ran towards the clock tower with the four puppies he had. He noticed that Alex had the other three. Blake silently cheered to himself because he knew that they could go back to Mr. Nakayama and tell him that they finished the job but he had to get Alex down first. Blake stood at the base of the clock tower and looked and the top. "Alex!" He shouted all the way up to the clock tower. Then he saw Alex sit up and scratch his head looking down at him.
xXSpiritXx