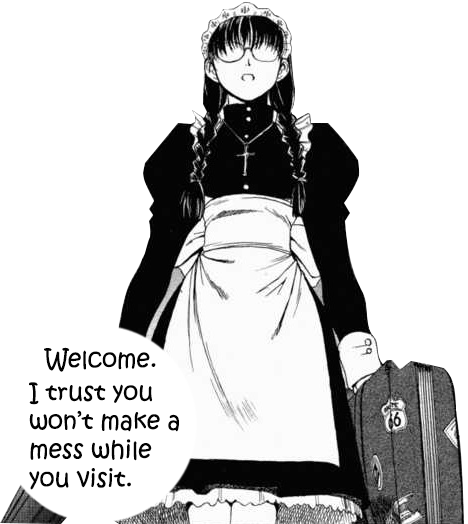 Story
Home in Hargeon Town Arc
Fruit for Lamia Scale - A maid joins the ranks of Lamia Scale.
Adventurous Desires Form Here! - Enola Gay, Taraki Meyka, and Sinon Suzubeki unite around Shohei Kirsagi to form Team Leviathan.
Encounters - A chance encounter between Enola Gay and a member of the dark guild Tartarus occurs.
The Shadow on the River - Enola is saved by Daemon Spade, guild master of Surīpingu Mori.
The Test of Courage - Kihia Avoa, the Hero of Courage and an ace of Lamia Scale, tests Enola.
Wedding Crasher - Enola conducts a test of her own while escorting Blair Cure Désir on a job.
A Matter of some Importance The guild hall comes under attack and Lamia Scale loses its guild master.

The New Master Arc
Wandering Swordsman Enter Lamia Scale - As Lamia Scale makes peace with the loss of Zuo Cii, the guild begins reconstruction and continues to grow.
Find the Lost Puppy! - Enola puts on the Inopian uniform once more and joins Shohei Kirisagi on an adventure.
It's Alive! - Enola brings her cousin back from the dead with the help of a mad scientist.
The Leviathans' Feast - Team Leviathan welcomes its newest member, Hakumi Nazu.
The Rarest Gem - As Enola and Hakumi set out to stop a treasure hunter gang, Enola indirectly becomes responsible for the death of Diamond.
When Leviathans Go Camping! - After Taraki goes missing, the Leviathans gain a mysterious new member and take him camping.
The Fire that Consumes You - Enola must put aside her fear of fire when she accompanies Aiyana to save Oak Town from fire mages.
OCD - Kihia gives Enola another test.