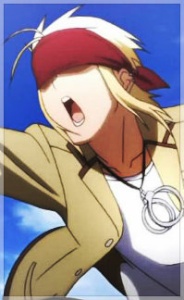 Job Description:
Job: Scare Away Those Thugs!
Job Location: Restaurant, Hargeon Town
Rank: B
Player Requirements:six mages applying maximum. At least 25 posts long and 350 words per post minimum.
Job Requirements: At least one B-rank Must defeat or at least make all enemies flee.
Job Description:"Normally I wouldn't have to do this, but I was unable to pay up protection for this month to these thugs that harass all the shop owners and restaurant owners who destroy the building of one who isn't able to pay their fee. I told them I would be able to pay them at the end of the week, but business has been so low that I can't afford it. Please, scare the thugs away from this town so that I may be able to keep performing my job and hopefully become successful. If you can't scare them away, make them be afraid of you by defeating them, just do what you can. I promise I have enough money to give you your reward if you do."
Enemies: Very Weak (single hit, player controled): Toucan King
Weak: Thugs
Medium: Body guard
Strong: Mercenary mage
Reward: 5,000 jewels and a free meal each!

People stepped out of the way of the mage, as he literally danced towards the meeting spot he had planned, with one of the strongest mages in Lamia Scale. Shairako wasn't even sure how he had gotten on a job with Kihia Avoa, one of the strongest mages in Lamia. This was quite the honor for Shairako, though he still seemed like he didn't care one bit, like he had lost his emotions. Which was basically half true, but the guy just didn't show them to almost anyone, only his family members.

Though this was no day, to remember what happened in the past, but to work hard in protecting a restaurant. The job the two Lamia Scale mages were on was thankfully happening in the town, where their guild was located at, so it was just a short walk, in quite nice weather. It really wasn't like a day you would go and fight thugs on the street, to protect a restaurant. But it had good pay, and that's almost all Shairako cared about, as he needed the jewels to actually eat.

But getting to the situation at hand, Shairako had arrived near the restaurant and just sat down for a sec, looking around, but not seeing either Kihia or the owner of the restaurant around. He couldn't help but shrug at this. He may have been early, though the guy didn't even fully know, never bothered to look at the time for this job.

So while Shairako waited, he took a seat on a nearby barrel, located next to a market stall, where they only sold cabbages for some reason. No one seemed to buy them either, even though the merchant kept yelling the same thing. Cabbages, consistently, cabbages. It was getting on Shai's nerves slightly, but for now, he had to suffer through this, hopefully he could, without going insane.

Kihia had arrived just a few minutes earlier as such he did so while standing on the rooftop, he looked down and examined the streets of Hargeon. The streets were as bustling as ever, the various markets were bustling, and it was peaceful under Lamia Scales watchful eye. However a case has arisen under the Guilds watchful eye, a restaurant owner was being threatened by those offering him protection for not making payments. The thought of this notion made Kihia sigh every time, why did this shop owner buy protection for a town that was watched over by an entire Guild, it was a most troublesome thought.

All of Hargeon should know that we will lay do our very lives to protect this town… Our Master made this town… rebuilt it from the destruction it had faced… but the Guilds services didn’t end there, nor will it ever end… Kihia looked down at the street seeing a lone Lamia Scale mage standing next to a cabbage stand that wasn’t doing very well, The member of Lamia Scale, Shairako had been standing there long before Kihia arrived at his current spot. Kihia didn’t know much about this mage, although he had heard word that he may be possibly a slayer of some kind, however he did not know the exact details.

''One sheep...two sheep... fourteen sheep...'' Shairako had fallen asleep, but counting sheep quite loudly. The guy wasn't even phased by the cabbage salesman anymore, nothing could really stop his sleep. Nothing that he could have ever thought off that is. The street noises, any kind of ambient sound or even the pesky vendor annoyed his sleep. Though the bandanna on his eyes really helped, but this wasn't it's main use, close from it. But it still helped in ways it wasn't meant to be used.

As Shairako kept sleeping, he didn't notice the small bird eyeing him from above. If he had been awake, there would have been a small chance he noticed, as he was good with small thing, but horrible with oblivious stuff. Just the way he was and there really was no changing that now. Though, his sleeping was interrupted, when the bird had landed onto his head and started to peck at him.

A cold shudder went down the guy's back and he sprung up like a spring. The bird flew off for a second but landed back onto his head. Shairako was confused to say the least, as a bird had landed on him, in the middle of a busy street. He reached his hand up, and grabbed the bird. It seemed quite friendly, not even flying away. But then Shai felt it, the bird was made of ice, a magic trick, nothing else.

Thanks to this, his senses rose in a second and the guy stood up. The bird may have meant an enemy or Kihia at this point. It was kinda silly that Shairako didn't know of his guild mates magic at this point, but oh well. If it had been an enemy, they would have attacked and not let their position be revealed by a little bird.

Kihia watched as Shariko hesitated for a moment then reached up and grabbed the robin and brought it down to look at. He heard the mages question to the robin and gently shook his head. Kihia then looked down at the street and spotted a good spot to jump down and land in without landing on anyone. He then jumped off the roof and fell down to a small space that was currently unoccupied. He landed in a kneeling pose making sure all of the weight from his equipment didn’t hurt him, after a long moment he stood up and looked at Shariko. "That little bird came from me..." He then nodded at the bird and watched as it faded away into a cloud of small ice particles glittering in the sunlight. Kihia paused for a moment and then turned towards Shariko and extended out his right hand in greeting, "My name is Kihia Avoa, as you may know I am the Guilds Ace of courage... may I ask what you are called" Kihia went quiet after that, as he waited on the mages response, although he took on this mission with the fellow Lamia Scale member, he had yet to introduce himself or learn of his companions name, which was indeed embarassing, but he was going to try and make things right.