"Woaaaaah!" Venir gasped as she stepped onto the dock. Crescent Island was just as beautiful as the magazine she had been reading suggested. She never would have found out about the place if not for reading about it in one of her favorite magazine's. Which of course caused the pinkette to take an impromptu vacation to Crescent Island. "A break from jobs and the guild will be nice!" The bikini clad mage grinned as she took hold of her bag and walked towards the beach. Venir figured she might as well have some fun before finding a hotel to stay in. The island didn't seem to have to many people this time of the year so finding a room wouldn't be to hard. "Besides it's been so long since I've been to the beach!" With that Venir entered a dressing room of sorts to change. 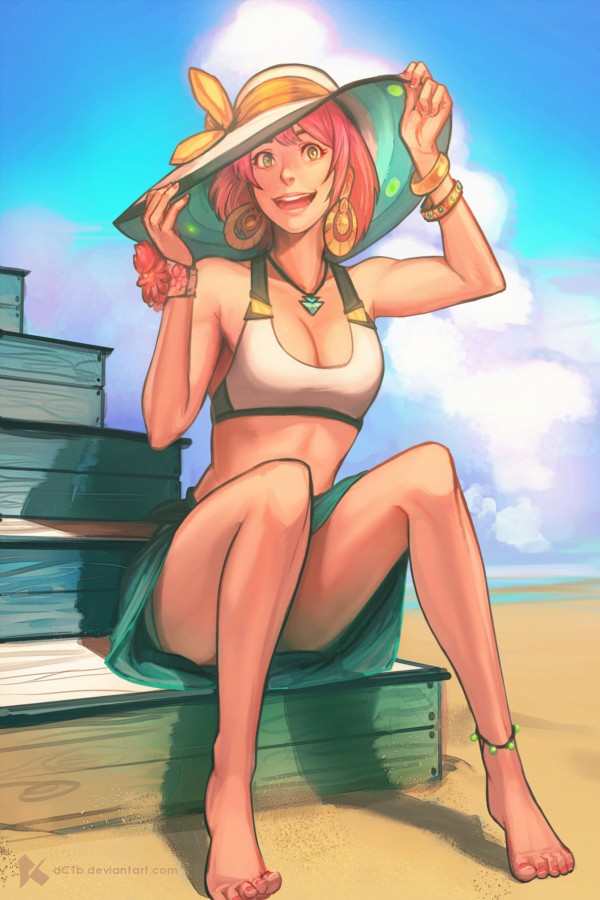 Venir emerged from the changing room clad in a white bathing suit. One might find it odd that she changed out of one bathing suit into another but to Venir it was normal. Her usual pink star covered bikini was like work clothes to her at this point. This outfit however was one that she had specifically bought for vacation. A white bikini top and bottoms to match, with a a blue cover-up tied around her waist. Her pink hair was taken out of its usual braid and fell in soft waves to her mid back, she also wore a white sun hat. With a skip in her step, Venir dashed out towards the beach. The warm sand felt like heaven in between her toes and the fresh sea air even more so. Venir grabbed a towel from her bag and laid it out on to the sand. "Might as well tan before I go play in the water!" She spoke aloud as usual. The pink haired woman had just relaxed down onto the blanket when a group of guys came over, blocking her sun. Her soft green eyes blinked for a moment as she looked at the men obviously leering at her. "I left my marbles at the guild! What should I do? How do I deal with these guys?" One of them had said something to her, some lame pick up line or something.
_____________________________________________________________________________________

The Draco Mage slouched over everything as he walked, even nearly tripping a man in a food shop. Calling Nikolai full would be an understatement. You see, he had just eaten what seemed to be twenty pieces of bacon sandwiched between ten cheeseburgers. Afterwards, he drank about ten jumbo-sized cups of non-alcoholic ale(Nikolai doesn't like getting drunk). That was not before drinking twenty bowls of soup, and all of the food took him just over four hours, so he was there for a long time.

I'm not going to give you any bullcrap, Nikolai cleaned out that beachside restaurant. But enough about that.

When the Draco Mage came out, his white hair glistened in the sunlight. He also made it a point to remove his clothing, exposing his body. He left the clothes on the floor, not caring what happened to them. He almost walked into the ocean when he bumped into some tall guy. And I mean tall enough to cover sun. When Nikolai walked back, he said a swift "sorry" and noticed something:

It was that woman. That woman. The one who goaded him into catching a jewel thief and withheld payment from him. He remembered reducing said woman to tears and making her kiss his feet. Goddamn, that was a nice thought. But whatever. It seemed like those guys were blocking her view and bothering her, so Nikolai guessed he had to do something.

Venir was just about to ask the men to leave when another man had shown up. This one however was someone she knew. The pinkette scrambled to her feet with very little effort. One of the men gave her a cat call but she simply ignored it. "I'm with him!" Venir turned to the men, hands crossed firmly over her ample chest. She stood beside Nikolai until one man after the other left seemingly scared of the white haired man. "Whew! Crisis averted!" That's when Venir turned to greet Nikolai with her signature smile. She seemed rather happy until it everything came crashing back to her. "Wait a minute. He's the guy that played that mean trick on me! Doesn't he owe me or something?" However Venir then remembered his recent help in dispatching the ogling men.

Nikolai was too focused on the men running away, and the food he just ate, to notice the woman. Yeah, yeah, yeah, it was that woman. The woman who kissed the Draco Mage's feet. Good times, good times. Anyways, the multi-titled Wildheart blinked twice, before turning back to greet the woman who stole from him.

Was all the Draco Mage could say at the moment. Well damn, was all he could say after getting a good look at her. Either that or he managed to get drunk off the non-alcoholic ale. He was either right or hallucinating, one or the other. He really didn't give a damn which one it was, just as long as he's still alive or something. Well, rather just as long as whatever, according to Nikolai.
Mistress Venir

At Nikolai's words Venir narrowed her eyes, "It's Venir. Not woman. You can call me Ven or Veni if it's easier to remember though." She shrugged before once again letting an awkward silence over take the two of them. The pinkette struggled trying to figure out how to speak to the white haired mage. He didn't exactly seem to be one for conversation nor did he give her much to work off of. Venir herself wasn't exactly the best at social interactions either so she struggled for a moment or two before finely motioning towards the water.

Don't give me any grief, it's a hell of a lot better than being called "thief", isn't it, Nikolai thought.

The Draco Mage's eyes shifted as the woman changed her attire. Goddamn, he thought. Was he drunk or something? But whatever. He had heard the words "Wanna go for a swim" and immediately declared that he wasn't going for it. Truth is, Nikolai hates large bodies of water. Probably some childhood trauma or something, but who knows, I haven't thought of it yet.

"I don't swim," Nikolai muttered while putting his hands in the pockets of his swimpants.
Mistress Venir

Venir simply ignored Nikolai's call of 'I don't swim'. She herself was incapable of understanding as to what he meant, how could someone not swim!? The pinkette simply waded out farther into the water, diving under the waves for a moment or two before resurfacing. Then an idea had struck her. It wasn't a good idea but it was an idea none the less. Moments later Venir returned back to the beach. Rivulets of water running down her tanned skin as she jogged her way back to Nikolai. Taking a moment to push her wet, pink bangs out of her face Venir smiled at Nikolai. It was an innocent smile, perhaps a little to innocent for someone like Venir. As quick as a snake Venir clasped Nikolai's hand with both of her own. Then she began tugging him towards the water still smiling. "Come on it's fun I swear!" She beamed at him and pulled with all her might. The sand shifted under her feet in just the right way to cause the pinkette to lose her balance. She tumbled to the ground, pulling Nikolai right down with her. "Ouch!"
_____________________________________________________________________________________

Where was I, oh yeah. Nikolai hates large bodies of water. He hasn't told anyone why, but depending on how apprehensive he was about it, you'd think the water had done something wrong to him. But whatever. I have no time to watch people bathing, the Draco Mage thought as he began to shift away, but his hand was grabbed.

It was that woman. He hadn't noticed her until he saw her smile. For one little woman, you sure are obstinate, the Wildheart said in his mind before his hand was yanked, pulling the rest of his body by until the woman just had to fall. Nikolai stumbled over, unknowingly landing right on top of the woman.
Mistress Venir

His eyes were closed, so he had no idea what was happening. He did feel something at his cheeks. He had buried his hands in the ground to pick himself up when he realized that he had done a very bad thing, which was that he buried his face in the woman's breasts, something that is frowned upon in the public. You could hear Nikolai muttering obscenities under his breath as he mustered up the courage to say one word:

Venir watched as the man slowly picked himself up and out of her general chest area. Hearing him curse and his apologies Venir remained quiet for a moment. She at least crossed her arms over her chest as if to cover it. Though it's not like she could really stop him from doing it again, which she highly doubted he would. Finally the pinkette spoke up, a faint blush coloring her cheeks. "Would you mind getting up?" While Venir was usually the one without any personal space this was a bit far even for her. Normally, she was in control of how close she was with someone but this was completely out of her control. "Besides I feel trapped." The thought alone made a rush of adrenaline go through her. Her fear of being cramped and well trapped in general made this very awkward for her, seeing as there was no way out from underneath Nikolai.
_____________________________________________________________________________________

The Draco Mage got up from over the woman and put one hand over his eyes, the other being used to comb his hair with fingers. Did that really just happen? Did I bury my face in a woman's breasts? Nikolai pondered as he ruffled his hair with his fingers.

"Sawz," was all he could happen to say.
« View previous topic · View next topic »