Daiki watched as Kihia had turned his attention to her after she had called his name, and would deflect a sword being thrown at her. She would sigh slightly before Kihia had used a spell that would cause a blade to form on his polearm. She would watch as he would dash between her and the King of Thieves, while avoiding the chain that she was using to bind him. She would notice that one of the swords on the mans back had managed to get out of its sheath, it would soon start to go flying towards the two, but she would watch as Kihia had deflected it away from both of them, and had barely managed to dodge a few in time.

He would soon duck down, letting go of his weapon with his left hand, and gathered some magical energy in his left hand, and casting a spell that would envelop the bandit. The bandit having gotten hit by it, would have moved back, had she allowed him to from the bind. As the flash of light had disappeared, the area around the bandit could be see as frozen. She make sure that the man couldn't move his upper torso still, though he the man somewhat recovered from the spell, he would send a telekinetic wave at Daiki.

As it had hit her, she would slide back a few feet, almost losing her footing. As she slid back, she would pull the man forward, causing him to slip on the ice, landing on his face. As he struggled to stand up after a moment of realing in the pain of having landed on his face, Daiki would soon start to swing him, causing him to hit a few different walls. That is, until the chain had loosened, thus causing him to fly into one last wall. As Daiki had brought the weight back to her, she would be panting a few times now. The total times the man had hit the walls was roughly seven times before the chain had loosened up. 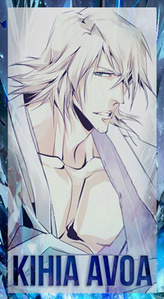 Kihia watched as Daiki followed up with her own Volley of blows as her weapon, eventually releasing the king of thieves, whom slumped down onto the ground struggling to get back up. Kihia frowned and walked over to the man, he held Icarus in his right hand and bent down and picked up the defeated King of the thieves. “Where is the Lacrima?” The King of thieves coughed a bit and glared at the ice demon slayer, “look where the Sun last touches… not like it will do you two any good… with it being mid-day…” Kihia’s frowned deepened, he then reared his head back and head butted the man knocking him out.

Daiki would listen to the king of thieves having told them to look where the sun last touches, and not that it would really help them, with it being mid-day and all. She watched Kihia's frown deepen in which he would bring his head back and headbutt the man. As the knocked out man was tossed onto the ground, Kihia would speak to her, looking up at the sky and letting out a sigh. He hoped that she had a better idea to the answer of the riddle that the king of thieves gave, because Kihia was coming up blank. "Since it's mid-day, and we don't have the time to waste by waiting, why not let me help, considering my magic..." She said, as she headed outside. "You stay in here and search when I use the spell I used to blind them for a short time." She said, before heading in the direction in which the sun would set before going a good enough distance away, so that the light would hit the building, but not close enough for the light to illuminate the entire side of it.

Kihia nodded at Daiki when she relayed her plan he watched her run off, he then waited for a moment. He then walked over to the doorway and put his left wrist up near his mouth and spoke into the communication bracelet, “Kihia to Icer… Be ready for extraction… Twenty Minutes” The bracelet lit up for a second and let out a small beep. He then saw a bright flash of light, he then heard Daiki’s call and rushed outside jumping high into the air with the light at his back.