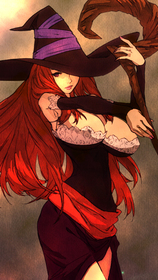 She didn't understand how in the world anyone could find this forest spooky in anyway, shape, or form. It was almost serene with trees so dense that it only allowed beams of sunlight to grace it's floors. The golden rays sparkled in the deep dimness, leaving trails of sunlight speckles everywhere like tiny fairies. Not many would come into this forest and then again not many were welcomed by it's in inhabitants. Most would stay away from such an area, giving it horrid names like " spooky " being misinformed by those weak of heart who dared not go near it. Such were humans, such was human nature. Smiling to herself a curvy figured followed a flora ridden path to anywhere. The curvy figure was obviously from any standpoint a female and not at all the least bit shy in showing it. Long locks of fire flowed gently behind her like silk over milk, eyes that tempted those who looked inside with mysterious amethyst gems staring mysteriously ahead. Yes the figure was something to behold as she lifted her head up towards the tops of the trees, the wide brim of her black hat being tipped back so that the beams of sunlight kissed her face. " I wonder what I will find here on this day...Or more importantly who." Her voice was sultry with a playful undertone as she continued to walk along the path. The woman brought her face back ahead of her, the wide brim hat hiding just a bit of her face. A smile playing across her as she continued her walk.
_____________________________________________________________________________________ 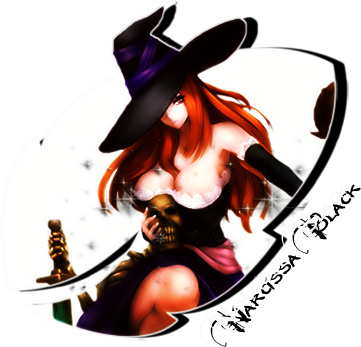 Her senses were tingling as she continued to walk. First came the smell, it was fresh blood with the coming stench of death. Second the sight of dead animals, large animals with distinctive bite and claw marks, signs of possibly a struggle with another beast. Any sane person would stop at these signs, but no Narcissa moved on. Her curiosity peaked as she walked closer to what could be her final stages in life. Her walking had brought her upon a rather frightful sight as a wolf, larger than she had ever seen stood in front of her with a smaller cub behind him. She could see that he was probably the cause of the dead animals she had seen just a moment ago and took note of such a thing. "What brings a human into the heart of the Spooky Forest? The voice of the wolf actually shocked the woman but she didn't show too much of it as she watched it laying on the ground, clearly weakened from it's fighting and then shifting it's body into the form of a human. The sound of bones bending probably meant it was painful enough without the added on fatigue the wolf boy must have been going through. She watched as his fur vanished and clothes began to take his place along with skin and hair. This was honestly not what she was expecting on this fine day and in fact she found it quite entertaining. She couldn't answer his question, from the moment he asked he was already on his way to collapsing and shifting.

Walking closer the woman bent over and felt for a pulse before deciding the boy was not dead. She knew of a river not too far from where the two stood and without another second wasted she dragged his body towards it. The tiny pup whom the boy was with followed loyal barking every now and again. Upon reaching the river the woman set the boy near a soft patch of grass and leaves. Thinking for a moment she wondered what to do with such a handsome young man. Lost in a moment of thought she decided it was best to see what he was about before making a friend of him, or killing him off for whatever reason she could think of. Ripping a piece of her skirt off the woman dipped it into the cool river and quickly bent over the male, wiping his face clean. If he happened to wake up during this process he would find himself close to a face full of bountiful breast. If he stayed sleep she would continue the process a few more times before placing his head in her lap. Either way he would get a good view of her womanly charms.
_____________________________________________________________________________________

As she continued to clean the male's face she saw signs of his awakening. It was no surprise to Narcissa of his next few actions. A strong grip reached for her breast his eyes opening and a nosebleed to follow. He was clearly confused about this situation but not upset with it. " Well, well aren't we just full of vigor on this fine day, hm? " Her voice still held its usual tone as she cleaned his bloody nose before backing up just a bit to let the boy sit up. She couldn't be mad at the male's reaction and it was rather cute honestly. With him sitting up fully, Narcissa expected some questions to be asked or at least introductions to be made. Well funny thing about life it was never how you expected it to be. Ah life, it was crazy, cool, calm and anything in between. Well it seemed the male hadn't recovered fully because soon he was falling forward, his face pressed against her breasts. She wanted to giggle, stroke his hair and tell him it was ok, but this might have brought on another nosebleed and she wasn't sure just how much blood this boy lost. " Most men would ask me my name first you know. " Her voice was playful and calming as she hopped to make him feel comfortable.
She awaited his response to the lighthearted situation, her pure Amethyst eyes looking down into his.
_____________________________________________________________________________________

Watching the male move as he did Narcissa got the feeling that he was nervous as some of his movements and reactions led down that path. She found him quite handsome as he removed himself from her and stood at full height. She took in his features for a moment before getting up herself her smile never wavering. Please forgive me for getting acquainted with your bosom milady. It shall not happen again without your consent. My name is Daemon what tis yours ?"So the male had a name, Daemon. What a name it was, rolled off her tongue nicely when she whispered it back to herself. The name dancing on her tongue and playing upon her lips. It was only a momentary lapse but she found herself raising her voice to greet the question posed with an answer.
Narcissa, Narcissa Black. Oh and it's quite alright, no harm done really. Are you sure you are alright? Since I've found you, you lost quite a bit of blood. Do you need to rest more?
She didn't need him passing out again as she crossed her arms under her breast, elevating them a bit as a look of worry passed over her. Once she was sure he was ok they could move onto more pressing matters, for one why was he a wolf a second ago?
_____________________________________________________________________________________