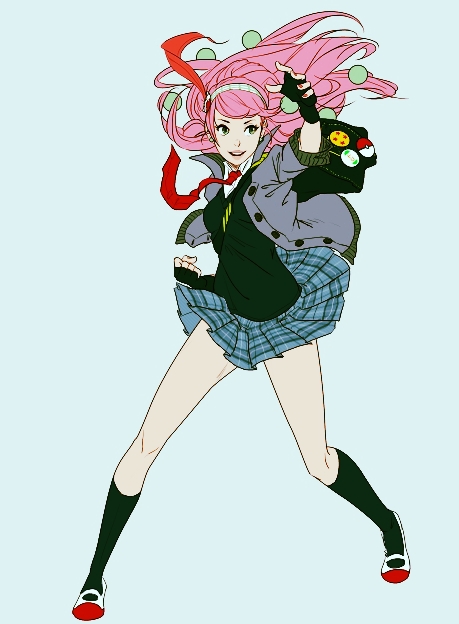 "I can't believe the stupid nurse made me change out of my normal clothes!"The pinkette grumbled as she slipped on the clothes given to her. She had shown up to the hospital in her standard bikini and one of the nurses almost had a heart attack. Another simply scolded her for planning on showing up to entertain children in a bikini. Luckily, they managed to scrounge up some clothes in Venir's size but the pinkette didn't think it would be a school uniform and a grey sweater. They were left over clothes from previous patients that never bothered to pick them up but at least they were washed and pretty comfortable. Though of course Venir would feel much more at ease in her usual attire. "At least I still have my bag of tricks!" Venir grinned as she picked up the hefty bag with one hand. She still had quite a few left over items from when she was in the circus, that would definitely come in handy for the mission.

"Hey why are you in school clothes?"

"Why is your hair pink?"

"What can you do?"
Venir was left to fend for herself in a room filled with children who had been bored out of their minds for who knows how long. Within a few moments they began to bombard her with questions faster than even Venir could manage to respond. Then came the touching part, those who could managed to walk on over to the pink haired mage and pull at her hair, skirt, or anything they could get their hands on. While most would be mad or frustrated at this point, Venir seemed to be enjoying herself. She adored children and had previously made a living by entertaining others at the circus and to be more specific it was children that she entertained. Besides the chaos that they created around her was more than a little amusing and most of the time the children probably didn't get to act like this. Letting them get a little bit of their energy out she waited for them to finish their questioning, touching, and overall curiosity about the pink haired mage. Once they settled down a bit, wanting to see what Venir had in store for them. Not one to miss a beat Venir went to her bag of tricks to figure out what she should do first.
_____________________________________________________________________________________

Pulling out her marbles Venir turned to face her young audience. "To answer your earlier questions. I'm Venir but you can call me Ven or Veni. Yes I'm a mage from Eclipse Soul. Today I am here to entertain you guys! Are you ready to have your minds blown?" Her own excitement was contagious and the children all eagerly awaited to see what the pink haired mage had in store for them. "Alright here we go!" With a bright grin she began to juggle the marbles. While Venir herself seemed incredibly amused the children did not find the juggling very entertaining.

Venir floated the marbles around the room for a bit, watching the children try and catch the soft green marbles. Then she brought the eight marbles together and tried to make shapes and pictures out of them to the best of her abilities. Once done with that Venir moved the marbles back to herself and rested them in her palms. She picked one out of the eight and tossed back up into the air, "Expand!" She called out. The single marble expanded to Venir's desired size. Much to the children's awe the object grew and grew until finally stopping at around the size of a yoga ball.

With ease the pink haired mage moved the floating marbles towards her feet and with a little bit of help from her magic she began to juggle them. Though to the children it looked like she was truly able to juggle them without the use of her magic. "I used to back in the day but not anymore." Venir thought to herself with a strained smile. Her arms we shaking from the effort and the pinkette was beginning to wonder how she was gonna get down from this position when all of a sudden the marble under her palms began to shrink back down to its original size. With a resounding 'thud' Venir hit the tiled floor. "Owwww!" She groaned as numerous children laughed at her mistake. At least one of the little brats asked if Venir needed a nurse but she shook her head not wanting the nurses to think she was incapable of handling herself. "That was on purpose you know!" Venir countered back but the children seemed to laugh harder as Venir tried to at least seem like she was a capable mage and entertainer. Though she couldn't help but smile a little bit seeing that they were amused. "Does my embarrassment and mistakes really amuse them that much? Well then this should be easy!"
_____________________________________________________________________________________

"Oh no what do I do?" Venir moaned out as she attempted to gather up the shards of glass much to the children amusement. "Well......There is something you can do that will make the nurses forget about the broken glass...." Another child seemed to pick up on what was happening. "Yeah we used to do it all the time but then we got in trouble." Another one piped in, "Yeah! You're a mage though so you can get away with it!"

After disposing of the broken glass Venir let the children gather around her and whisper their plan to her. Having no sense of right or wrong, and being half-insane made the plan seem like a good one to Venir. "I can do that! It'll be a slice of cake!" Venir shrugged and grabbed a vase of flowers from one of the children's night stands. "All of you hurry back to your beds! We only have a few moments before the nurse comes here from the sound of the glass breaking!" The children all listened to their pink haired entertainer and dashed to their beds eagerly. They watched with impish grins as Venir took the flowers out of the water filled vase. Then using her magic she floated the vase over to just above the door and waited for it to open.

"WHAT WERE YOU THINKING!?" Venir visibly winced as the soaking wet nurse scolded her for what felt like the thousandth time. "WE JUST GOT THEM TO STOP PULLING PRANKS ON US AND NOW YOU'RE TEACHING THEM THAT IT'S OKAY!?" Venir opened her mouth to defend herself but was quickly silence as the nurse went on another long, lecture. Perhaps an hour later the nurse's rage had finally boiled down and her clothes had dried off a bit. "You know children like them look up to mages like you. I don't want you're actions leading them down the wrong path." The mage sighed before pulling out at envelope. "We'll look over your little prank this time Miss RuLush but we certainly won't be having you come back to perform again. Think of this money as incentive not to come back." Venir frowned as she took the envelope. She couldn't come back? Did the nurse really not like the prank that much? The children certainly seemed to find it funny.

"I can't even come back to visit?" Venir asked and was answered with an abrupt and very angry 'no'. With a deep sigh Venir made her way to the exit, dragging her feet along the way. With her bag of tricks in one hand and the envelope in the other Venir was about to leave. At least they let her keep the school clothes to. Though that might have been the only plus about this job....Well that and the money.

Venir spun around was greeted by numerous children rushing towards her. In a matter of moments they had surrounded her, all of them reaching out to hug her. Most of them could only hug and hold on to her legs but a few managed to grab hold of her waist. "You can't go yet Miss Ven!" One child cried out and seemed honestly upset that Venir was leaving so soon, "You can't go without saying goodbye!" Another one managed to squeak out another request, "And not without doing one last trick!"

Venir looked between all the children that had gathered around her eagerly looking up to her. "Of course I wouldn't go without one last goodbye and a trick!" Venir smiled, her honest smile and knelt down to try and give them all goodbye hugs. Then with a mischievous grin Venir glanced at the head nurse from earlier. She was busy talking to one of the doctors at the hospital. "Shhhhhhh!" She she told the children and found one of the large flower vases in the waiting room area. With ease she used her magic to float the vase over to the nurse. The doctor had noticed the vase but it was already to late as the water and even flowers was dumped on the nurse causing her to shriek.