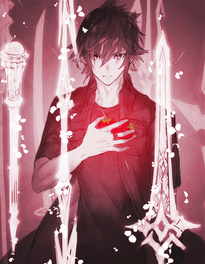 Job Information:
Job: Spidercat!
Rank: D
Player Requirements: 3 participants maximum. 12 posts per player. 90 words per post.
Job Requirements: At least 2 D rank mages or the equivalent of. The cat must be rescued in perfect health for the job to be completed
Job Location: Mountain Village

Job Description: On the west edge of Mountain Village lies a small cottage with a really big yard and in it - a ridiculously huge tree, towering above the surrounding buildings like a skyscraper. All three belong to a particularly grumpy and irritating old lady who had recently adopted a little kitty named Oliver. One day little Oliver was allowed to roam around the neighbourhood freely by his owner which inevitably led to an encounter with the homeless dogs that roam around the streets. Chased by the starving dogs, the small kitty ran back to it's owner's yard and climbed up the tree, hiding inside a tree house the neighbours' kids have built over 35 metres above ground, inside the absurdly large tree's crown. Now Oliver is too scared to climb back down, so it's up to you to return him to safety before the old lady's endless ranting shortens the villagers' lives by at least half.

Enemies:
Weak: Dogs- these homeless creatures are so starved they are ready to eat anything that fits their mouth and can be chewed, and the little kitty is a prey they find to be greatly attractive. They'll attack anyone who tries to keep them away from their lunch.

Normal: Crows- these birds nest inside the tree's crown in great numbers and usually do everything in flocks of at least 3. They view anyone climbing the tree as a threat to their eggs and are going to protect their offspring with great ferocity, regardless of who or what it is. They also like stealing shiny things.

Strong: Kids- the neighbours' children have built tree houses all over and use them to host "secret" tea ceremonies and fan clubs. They don't like to be disturbed and would do all they can to make an outsider's life miserable, such as cutting the branches the transgressor is standing on or throwing stones at them. On the bright side, they atleast have rope ladders set up, making it easier to traverse the tree. Just make sure you're not climbing one when they notice your presence.

Boss: The wind- Indeed, 30+ metres above ground tends to be a rather windy height. Just hope you are not "lucky" enough to get strong winds blow against the tree's giant frame, as it would start shaking like there is an earthquake. Not ideal when you are climbing it. Lasts for 2 posts.

Reward: 750 jewels and several dozen splinters stuck in your arms and legs.

The member 'Decayuss' has done the following action : Dice Rolls

Deniel sat on his bed within his underground room looking at another D rank job description. It had been a long time since he did so many, back when he was actually a D rank mage. Just the day before, he completed two of them in a single day. It was midly entertaining, and he was in the mood to do another one. It was quick, easy, and easy jewels for him. This next one was even more simple than the first, and especially the second. The second job that Deniel did is something that was still on his mind. What Jacob Goonight said to him about Deniel killing people. Was he really right? Deniel thought about it the rest of the night, on his way back to Eclipse Soul's Headquarters, and he could barely even sleep thanks to it. It contradicted everything Deniel believed about himself, and even lead him to think further about his interaction with humans. Were they really so evil? And better yet, was he so different than him? Deniel fell in love, he got angry, he got sad, he had their same emotions. He was able to think, to learn, to fight. There were even humans out there that were stronger than his current state. So what made him so different from them? Other than the blood that ran through his veins, Deniel saw no difference between him and humans at all. Maybe he didn't need to be so afraid of them. Every time he thought of that, though, he thought back on the days of Bellum, although he didn't want to. One human against him might be understandable...but an entire contry discriminating against a Nephalem. Fiore didn't seem to share the same thing, but Deniel wasn't too sure. Until he found out why Bellum did what they did, he wasn't going to trust humans as much as he could be.

Focusing back on the job sheet, it seemed very simple. All he had to do was rescue a cat from an obnoxiously large tree for an obnoxious old lady. Deniel shrugged and hopped off of his bed. He might as well get started now. If he were a normal person, this job would prove a challenge since he would have to climb up that tree, but all he had to do here was use one of his wing spells, fly up there, get the cat, and come down. It was that easy and simple. Deniel looked at the reward for it: seven-hundred fifty jewels. Just for using his spell once, Deniel was going to make himself seven-hundred fifty jewels. "Well, then....that shouldn't be too hard."  The location of this job was in Mountain Village, which was just east of Eclipse Soul's headquarters. Deniel could easily fly there, get the cat mid-flight, deliver it to the woman, and get back in just a few hours. And then after that, he would have enough time to go on another D rank job, possibly even a third. With that in his mind, Deniel took off his black cloak that he had been wearing and sprang off of his bed. "Nidhogg, you don't mind if you stay behind on this one, do you?" "Not at all. Unless you plan to cut down the branches, I won't be needed." Deniel gave a light chuckle and started to head towards the exit of his room. "Don't worry. I'll be back before ya' know it, partner!" Deniel hurried his pace a bit to the exit of his room.

On his way out of his room, two magic circles appeared on Deniel's back, and began to move out in a weird shape. "Wings...of the....WHITE ANGEL!" As his Take Over finished going on his body, Deniel reached the exit of his room, and leaped out into the open. He was at the base of Phoenix Mountains. His wings gave a powerful flap, propelling him high in the air. When Deniel was ascended the height he wanted, he spread his wings out wide, and started to fly towards the east. He stared both ahead of him, and occassionaly down at the lands of Fiore below him. A lot of people in the world would give everything in order to fly, but Deniel could do it anytime he wished. And not only that, he took it for granted; to one it would be an exciting thing, to Deniel there is no adventure in it. Deniel flew for several minutes, and he was able to see the mountain range that Mountain Village was perched atop on. Even from here, he thought he could make out the giant tree that the cat was being held up in. It was no wonder that no one bothered to get it; it was a pretty tall tree. Deniel got closer and closer, and the tree got bigger and bigger.

Eventually, Deniel was very close to the try, almost in front of it. He heard barking below him, and he looked down to see dogs viciously barking at him and trying to climb up the trees to get him. He thought they were pretty dumb, because Deniel was way above them. When Deniel looked back up, a flock of about six crows came out of no where and started to peck and scratch at him. Deniel wasn't hurt by them, but they were really getting on his nerves. With one swift movement, Deniel flapped both of his wings and smacked all of the crows away from him. After they were temporarily gone, he flew into the tree's branches and leaves to see if he could find the cat. It didn't take him long; since it wasn't really trying to hide itself. It was cowering at the edge of a branch, and it was staring at the dogs barking below. So that's what they must have been barking at, not Deniel. Deniel shrugged and approached the cat. The cat suddenly looked at Deniel, in complete shock and fear. Deniel heard that people usually talked to animals, thinking that they could comprehend them...so he thought he might give it a try. "Don't be scared...I'm not going to hurt you. I'm just here to return you to her owner. She's worried about you...you can trust me." Deniel then slowly grabbed the cat, and it seemed the dumb trick worked. It didn't seem scared of him anymore, and in fact nuzzled against his chest. It kind of reminded him of Alyia...