Raid the Farmlands!(Team Fear the Darkness)

Tenno would be cleaning his blade, the smell of cannabis seemed to keep him from tensing up like battle usually does to a person, he might have to use this in later battles, but when he heard misson was done, he decided he would head back to the guild, and turn in the success, as well as sitting down with a group of people and excitingly told them about his first mission, the one detail he left out from his story, was him turning back to look at the destruction of this village, and he could only remember his village like that, the heat on his face, the sick yet sweet smell of burning human flesh, the sounds of cracking wood and screaming women and children, and instead of going crazy like most would, he reveled in the thought of his people getting revenge through him, it may not be the people who deserved it, but this village was a stepping stone, one to get him going in the right direction of the utter destruction of the scarred man 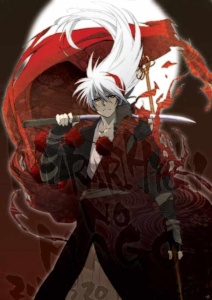 Upon this throne of bone shown a man who'd grown past being a drone. This was after the current circumstances in which he was a mere average mage, but it was obvious to all his growth had been incredible in the past few years. From helpless little boy to a full fledged mage, capable of physically matching mages a rank above him, and possibly even more. His memories of that past where he had been just another weak child crawling for the slightest bit of power, for recognition... He would have laughed, really, but the simple fact was that those memories were brighter than his current state. A life with no purpose was not one he wanted. No goals, no hope, and nothing to keep him going. At least back then he had a goal that he genuinely wanted, but considering his latest goal had essentially broken itself, he was done trying to make things work. He could only go so far on his own.

It was why he had agreed to this team, but then... Every time he trusted someone else, they betrayed him one way or another. If they didnt, they just made him weaker. This... was no different. He was an absolute monster on his own, so why did he need anyone with him? He was better off alone at this rate. Nakiya and Zaacha had been, at best, decent. These two were not even decent, though, and he felt himself grow disappointed with this guild. He had expected to meet like minded individuals who he could relate to, who would not hold him back in such a manner. Kuro glanced at Yuuki and Tenno. Perhaps he should simply leave this team, then. Let them do their own thing, while he left? Maybe, but something told him to stay, at least with the guild. At the very least, he could go solo from now on. That was what he wanted wasnt it? To not be held back... But perhaps it was not him who was being held back by who he was with...

The slaughter had left such a stale taste in the air, the crimson hues flickering in the darkness of the night as the once flourishing farm was now reduced to a simple reminder of what one of the dark guilds could do and yet it felt as if the job was simply one part of a smaller puzzle. Yuuki found this to perplex his mind in ways that would cause him to wonder if their would be other chances like this again, to feel the splatter of another human beings blood onto his face and body...To feel the wet squelch of anothers body beneath his feet, but what was to say that he wouldn't get another chance.