To Earthland... and Beyond! (Job/Solo) 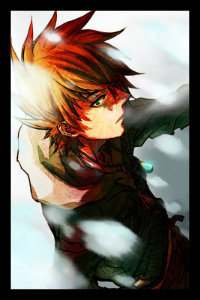 To Earthland... and Beyond! (Job/Solo)

Alexander had traveled for three days before reaching Hargeon Town only to be met by a massive line. Three hours had passed since he had joined the line and in that time he had moved a total of four steps. Luckily alex had brought along plenty of food, there were many things in this world he enjoyed but food was among the top contenders.  He reached into his backpack and brought out a small bowl of food, upon unwrapping it revealed a bowl of rice and beef with a small plastic fork. As he began eating the line started moving along, "finally, it's about time we had a bit of progress." alex thought to himself.

the line had now adapted a steady pace of three to five steps per half hour, after finishing his food alex looked around there were plenty of people about to keep his attention , the kid crying of how he was bored, the lady talking to her boyfriend of how she could't wait to travel, and the two shop keepers across the street arguing on whether or not they could put out signs to attract more customers, so many attractions he couldn't decide which to choose.

alexander had finally made up his mind he settled on the shop keepers arguing when suddenly the couple in front of him recaptured his attention "what is wrong with you are you even listening to me?" asked the woman "what?! yes of course, i can't wait either we will go... where ever .... you... want." the mans voice began trailing off as his gazed had been fixed on something else, curious alex followed the mans gaze to a woman walking just past the shop keepers in she was very attractive indeed.Her hair was as dark as a starless midnight cascading down around her shoulders in soft curls. pale skin as if made of soft cream, with just the lightest pink on her cheeks below soft, high cheekbones.  honey eyes exotically shaped of almond. Wearing a red dress, strapless, corset topped barely containing her firm, bouncy perkiness of a D cup breasts. The bottom bare covers her rounded well shaped bottom. A thick belt at her waist does nothing to hide its slimness, or her well formed figure. She walked gracefully with a sway of hips, placing one well formed leg in front of the other with each step, as if saying "you like this, take a look at this one then" revealing the top of her thigh high stockings along the way. Open toed stilettos framed her perfectly pedicured toes.

alex didn't blame the man for looking, in fact he couldn't seem to pry his attention anywhere else not that he would want to. as  alex watched the beautiful woman walk the couple had already begun arguing, just then somebody had placed there hand on alex's shoulder and shook him gently. "umm.. Excuse me sir?"  alex turned to see a very petite young woman standing behind him, "oh hello" alex said. "hello my name is Rachel, i need to know if you are a Wizard we have had alot of people coming into get passports lately and are now going up and down the line looking for wizards so that they may get theirs given that majority of there work is dependent on job requests, so they are to be brought to a separate line to get their passports so that they can get back to work as soon as possible." she explained very rapidly without even needing to take a secondary breath "yes, i am a wizard" he responded "great if you would be so kind, follow me please" she said as she led him to the front of the line he was then left at a booth next to the line he was just in. He filled out the forms and turned them in the man at the desk looked them over and after all was said and done alex was handed his passport and sent on his way, alex left happily to explore the rest of town.