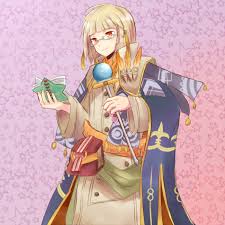 Rokai nervously walked up the steps to the guild hall, skittish at what he might encounter, he peered through the open door to try to see what was going on and make a sense of the guild. The guild looked merry and joyful as the guild members drank and made merry. Hoping that someone would notice he walked slowly and whispered " H-h-hello?"
Kirahunter

Sadly a tiny whisper did little to attract attention in a massive and wild place like the Fairy Tail guild hall. In fact even barging in and yelling profanity could go completely missed on a more excited day. But it seemed fortune shined on Rokai, that or it cursed him, as somehow he had attracted the attention of local mage Simon the Phoenix. A young man who looked more like a boy then even a teenager who was at the moment standing on the ceiling gazing down on the various activity below. Currently in between work he really didn't have any way to pass the time, so the appearance of an unfamiliar face was a welcome sight. With hawk like vision even an entrance as humble as Rokai's would not go unnoticed by Simon. At the sight of a potential new member he wasted no time jumping down from the ceiling with a big grin on his face.

Rokai saw the young boy jump down from the ceiling and come up to him with a big grin asking who he was "U-u-um my name is Rokai, a-a-and id l-l-like to join this guild if youll have me that is" he blushed at the young boy. Rokai had heard great tales of fairy Tail from the nurses who serviced him when he had lost his memories and woken up in the capital's hospital.
« View previous topic · View next topic »