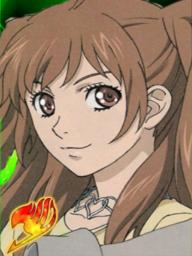 Zoe was sitting at a table, reading a book that was kept on the table when she heard a voice introducing themselves to the guild. She looked up to see a girl named Crescent and it looked like she was a newcomer. Zoe smiled, closing her book so she could go greet her as Zoe herself just entered Fairy Tail.

Before she could greet Crescent, someone jumped from the rooftop landing a few feet in front of her. He introduced himself as Simon the Phoenix and welcomed the girl to Fairy Tail. If memory served right, then Simon the Phoenix was a wizard saint. However, she didn't expect him to be this young. Zoe thought of just going and welcoming Crescent as well. She walked over to the two and smiled brightly. "Hello there! Welcome to Fairy Tail!" she chirped excitedly at the girl, "My name is Zoe Schiffer and like you, I'm a new member as well. Nice to meet you."
Kirahunter

Simon grinned at the recognition and slammed his fist to his chest "Yup! That's me! I've been in Fairy Tail since I was 11 years old." As another girl approached Simon took a step back to make some room before he continued speaking  "Sup other new person. Well Zoe, and Crescent have you guys been outfitted with a Fairy Tail crest yet? I'm afraid our guild master has been absent as of late so I'll have to give you your tattoos instead of her." The words "I'm afraid" came off with a bit of sarcasm really for two reasons as first Simon knew very well for a fact that the guild master was in fact gone and because he was rather happy about the fact to be honest. Regardless of that detail he continued casually "You can really get your guild seal anywhere you want but I recommend keeping it in an easily visible location so you can be easily identified. However on the flip side of that coin is that you want it to be in a place that can be easily hidden in the case you want to be left alone by fan, if you get any."

Simon was right, Zoe had yet to get a crest. Brainstorming her mind, she wondered which would be the best place to put the crest and there was only one place she could think of. Zoe listened to Crescent saying that she would like to have it on the back of her hand. Zoe beamed at her, "That would be pretty cool. You could hide it with a glove too if you want."


Zoe then turned to Simon and said, "I'd like to have it on the upper part of my left arm." Amid all the talking about crests, Zoe wondered where the master was but since it wasn't any of her business, she decided to refrain from asking.
Shining Ace

Ace and Stella walked through the guilds door, it had been only a short time since the two of them joined the Fairy Tail guild and it already felt like to the two of them that they had been there for years, after walking in they sat themselves down at the nearest free table. "Alright! Another victory for team Beacon!" Ace exclaimed while fist pumping the air, Stella sighed as she watched her partner "I will never agree on that team name...."
"Yea well we are stuck with it, and besides I know it has grown on you."
"Only a simpleton such as yourself would think that."
"Oh is that so, so you think the name Team Fairy Dust is still better then huh?"
"Of coarse I do, I did come up with it after all."
"Uh huh sure you are Stella." Ace said sarcastically before Stella could react he asked her another question quickly changing the topic "So Stella what's this job for us you said you got approached about?" Stella stared at Ace for a second placing one finger on her lip a habit she had when she was thinking then she smiled as she waved her finger in the air as if she was a teacher as she told the details to Ace "Well a man named Oliver Heilstein approached me while in the market and apparently he has been having a problem with his neighbour." She then took out a neatly folded piece of paper and handed to Ace and just as he was about to take it a gust of wind blown it out of Stella's hands across the room and into the face of a girl who looked to be around the age of 12. Both even a few seconds had past and Ace was in front of the girl after getting over there by running on the tables and pulled the job flyer off of her face"Hey sorry about that. The wind blew it out of my hand. Stella on the other hand slowly walked up to Ace and the girl before holding out a hand to her with a friendly smile "Hi nice to meet you I'm Stella and this simpleton here is my partner Ace."
"Wow so that's what I get for taking the blame for you?" Stella to Ace's responded with a kick to his shin who seemed to be unaffected by it.
_____________________________________________________________________________________ 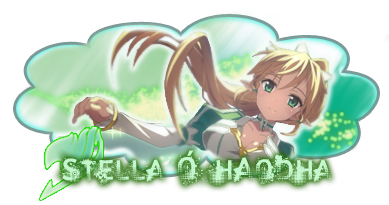 After hearing the requests of the new guild members Simon nodded and with a snap of his fingers their guild crests materialized on their skin. When the job flyer, Ace and Stella appeared on the scene Simon grinned as he had a wonderfully fun-for-him-and-bad-for-everyone-else idea. "Oi Ace, Stella stick around I need you for something. Zoe, Crescent normally at this point I would ask what kind of magic you use but I think I would rather see it in action. Also if I am as good at reading magic aura as ever you four are all rather close in magic power." He crossed his arms over his chest and inclined his head at the door "I say we go outside go into the forest a little ways and you all show me what you've got." Suddenly becoming aware of a possible concern he tossed in "Of course I'm an adept healing mage so we won't have to worry about anyone getting hurt. Sound fun?"

Zoe listened as the two newcomers introduced themselves as Ace and Stella. She smiled politely at them, waiting for Crescent to finish introducing herself before doing the same, "My name is Zoe. Nice to meet the both of you."

After the introductions were over, Zoe listened to Simon explain his idea about discovering each other's magic power by going to the forest and showing him what they got. Zoe looked at Simon, uncertainly, "Simon-kun, so what you're asking of us is to duel against you. I don't think that's a good idea because if what I know about you is correct which I'm sure it is, then you're an A ranked mage. All four of us combined wouldn't be able to beat you." Zoe paused and contemplated on what she said and Simon's previous invitation to battle. "But on the other hand, I guess it could be a good learning experience for beginners like me and Crescent-san. What do you guys say?" Zoe asked the other three D ranked mages around her.
CrescentWu

Manayus couldn't help but glance over as the newcomers arrived, wishing nothing more than to leave the company of those he was with right now. He  Currently found himself at a table with four girls all attempting to press up against him, all chatting and giggling as they spoke with the fairy tail wizard. None of them were from the guild, but all of them had become huge fans of his.

He really couldn't complain, he loved making sure that women were happy with whatever it was that would make them smile. Often times he went out of his way to be that playboy that some girls seemed to need. In this care, it seemed all these girls were more than happy to be flirted with by him.

Finally, when he over heard that they would be going outside to see their magic in action, Manayus couldn't sit still any more. Therefore, he turned to the woman on his right and gently tilted her chin up so that the girl was looking into his eyes.

"I am sorry to cut this short ladies... I would love nothing more than to spend the rest of the day with such beautiful women, however I am needed elsewhere."
The girls all seemed to swoon, but quickly protested. Manayus gave a soft chuckle before pushing himself to his feet and kissing each of their hands before offering them each a rose from the table before moving away from them, slowly, until he realized they had moved to follow him. He then began to move faster, and faster until finally he was found running away from the women and straight out the front door.