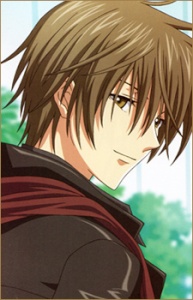 Kazuki walking down the streets of Magnolia, he had just left the local bookstore and had at least two books under his arm, one of them was the history of Magnolia the other was about the beginnings of Fairy Tail. If he was going to join this guild he wanted to know everything about it before he walked in the door, Kazuki continued to walk down the streets reading the other book he had bought "How to introduce yourself to strangers". As a new person there was a lot of pressure on Kazuki to make a good impression, and as he is already a shy nervous person he could use all the help he could get. Kazuki had been walking and reading through town what felt like an hour only bumping into a few people and muttering his apologies to the people that he had bumped into.

The only problem was that Kazuki had some how accidently walked into the Fairy Tail Guild already, this isn't the first time while reading and walking that Kazuki had walked into a random building his intstincts must have led him here, seeing as this is where he wanted to go, but it was still awkward because he looked lost when he had walked in here seeing as he wasn't looking where he was going. Oh well might as well just look for the Master to get accepted into this guild, he tried to ignore the people who were just staring at him. "Uhhh, Hi.....I'm looking to join you're guild" Kazuki had just finally said to all the people looking at him.
Manayus

"Oh look another new face! Helloooo there friend! My name is Manayus Valotaire, it's a great honor to meet you sir!"
A tall man with short, beautiful blond hair seemed to literally twirl into view, stopping only to take this strangers hand and shake it welcomingly, catching any books that might fall during his actions. His lavender eyes seemed to be warm with welcome as his bright smile spoke wonders of his flamboyant personality.

Kazuki is completely caught off guard by the gentleman just appearing infront of him, making him drop his books by surprise.....This whole first appearance part on this guild is just falling apart Kazuki's hand is all of a sudden taken and being shuck as this new person is introducing himself. He can't help but smile at this person, he sure is friendly Kazuki thought to himself. Thankfully the handshaking is finally over, but it feels like Kazuki is still shaking he chuckles a little bit "My name is Kazuki Kobayashi it's a pleasure to meet you".

Kazuki follows the man over to the bar, while he holds his books close to him hoping not to embarrass himself anymore. "So you said you're new too when did you start here?
Manayus

"Well, today actually!"
Manayus said with a boistrous laugh as he tried to spot someone who would be able to help him, and his new companion with joining the guild. In truth, he was just with them, having quite literally gotten his own guild tattoo.


"Well... it's a pleasure to meet you Mr Kobayashi. Now where did they we were just talking a moment ago... ah well.. why don't we meet a few other members in the meantime?"
He offered, looking around the guild hall to see which of the fairy tail members would be his next friendship victim. He was so excited at the prospect of making friends, never really having any growing up besides his mother and the mansion servants.

Kazuki couldn't help but laugh along to the mans comment about just joining the guild, it helped him blend in a little better and not as many people were staring at him any more but there were still a few people staring at him. It's only fair a new person pretty much making a scene I would be staring at me too. He shrugs it off or well at least tries to pretend like he doesn't care he motions for the bartender for two drinks and slides one down to Manayus. "Am I the first one you've met in this guild, seeing as you've just joined"? Kazuki takes a sip of his drink as he waits for a response from him.

Kazuki leans back in his chair a little and rubs the back of his head trying to not laugh at his own thought of his magic. "Heh, My magic is a little complicated, It's pretty much an Archive magic....it's pretty boring and lame I guess, I analyze other people's magic and store away there spells for a later use. Kazuki takes another big drink, trying to cover up his own embarrassment of his magic he coughs a little as he choked on his drink "What about your magic?"
Aiden Ainsley

Lance had joined Fairy Tail a long long time ago but had not been in the guild hall as of late as he had his own business to attend to. He had no time on his hands between going on jobs with other members and then on the other hand he was also prepping for a lot of concerts that had been set up for him.

Lance sighed "Only three more weeks until my world tour..." he muttered as a table of good looking girls fawned over him. He chuckled "I guess I should take this day as my day off." he said as he pat one of the girls heads and she freaked out bit.

Sakura wandered into the guild silently, as usual. She autumn breeze from outside had ruffled her long, ribbon adorned hair and flustered her cheeks. She glanced around the guild looking for a table to sit at however all of them were already occupied. Sighing, she made her way over to a table near her by which sat three men.
Sakura sat down at the table silently and pulled out a book from her bag, too embarrassed to start a conversation. She blushed and lifted the book so that her face was no longer visible to the people at the table around her. She recognized one of the men to be Lance Knighthunter, a guild member she had seen before but never really spoken to due to him being constantly surrounded by girls. The other two, Sakura noticed, had a new member feel about them. She peeked over the top of her book to get a better look at them.
_____________________________________________________________________________________

“Well my magic’s mostly based on support. I’m afraid that on a one on one fight, I might not be as great as the next guy.”
He admitted, still bearing a smile on his face as he spoke.

“However, I would still make that fight a beautiful display of magic prowess… and there’s no need to be bashful about archive magic! Honestly I would love to have that much magical information… and the ability to help others at such a fast pace is quite impressive! Ah, but forgive me it seems we have a guest! It is a pleasure to meet you mr Knighthunter, I am Manayus Valotaire, and this is Kazuki Kobayashi. I have just joined the guild today, however it seems the guild will be growing by another.”
He said contently, moving forward to take Lance’s hand and shake his hand welcomingly. However, his attention was pulled away from the man as a beautiful young girl appeared next to him at the table.

“Oh my… I have yet to see any such beauty within the guild.”
He stated as he moved from lance, standing to move by Sakura, bringing his hand up to his chest as if his heart wouldn’t stop fluttering at the sight of her. However, between his hand and his chest, a small green magic circle appeared, and when it faded, he closed his hand around a single red rose, leaning over to offer it to Sakura.