Holy Castle has become the citadel of the demon invasion.
Even though they have massive and powerful armies located in every big city in Fiore, the one concentrated in and around Holy Castle is even bigger.

The glass of the Holy Caste has become pitch-black, the skies are a dark bloodish red and there is fire and lightning everywhere. 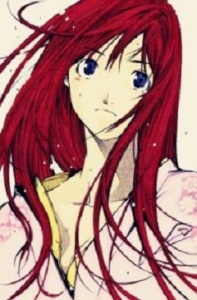 Re: Official Event Thread: Citadel of the Demons

A little girl clad in a red kimono with black flower patterns stood high above a cliff. She was staring at something below, the Holy Castle. The once center of purity and holiness was now defiled and it exuded a dark aura. Demons of various shape and size roamed about the castles walls. Winged demons patrol the castle's perimeter.

"Mistress, what do you suppose they are doing there?" came the voice. It was Yuki-Onna, the maiden of ice.

"Probably they chose this place as their stronghold. The question is, why did they chose this specific location and how did they manage to break through the castles barriers. The innate positive energy swirling around the castle ground would have been enough to repel any demons from coming this close." contemplated the young lady.

"I have a theory." came another voice. A cold nonchalant voice that seemed to ruthless and wise at the same time.

"Please, illuminate us Yasha." was her Ai's reply matched with an eyeroll. A hint of sarcasm was on her voice but the spirit did not heed it nor did she care.

"Eons ago, a tribe of of mages created a weapon that had the ability to interchange light and darkness. Yin and yang. Good and evil." said the voice.

"I have heard of such power. But it was said that combined efforts of the alliance of legal guilds had put an end to it." Yuki-onna interjected.

"Yes that was true. But lets just say a secret group somehow managed to recreate that power." there was a bit of mystery in her tone.

"I see one of the sacred relics. So your saying its in there?" Ai asked the spirit.

"Im not sure. But I do sense the presence of a relic in there, and its been working on overdrive." came the reply.

Just as they were talking a man dressed in militia uniform came running towards where they were. The man was bloody. Behind him were three demons. "Please help me!" the man said.

Then appeared a winged girl with carrying a bow and arrow and a guy with long red flowing hair wielding a whip.